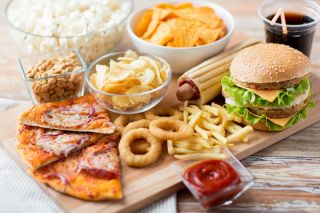 More than 80,000 cancer cases diagnosed each year in the U.S. may be tied to an unhealthy diet, according to a new study.

The study researchers used a mathematical model to estimate the number of U.S. cancer cases tied to suboptimal intake of seven dietary components known to be related to cancer risk. These included diets low in whole grains, dairy, fruits and vegetables; and diets high in processed meats, red meats and sugar-sweetened beverages.

Based on data from 2015, among U.S. adults, an estimated 80,110 new cancer cases, or about 5 percent of total cancer cases diagnosed that year, were tied to a poor diet. That's on par with the percentage of cancer cases tied to alcohol consumption, which accounts for about 4 to 6 percent of yearly cancer cases, the authors wrote in their study, published today (May 22) in the journal JNCI Cancer Spectrum. [7 Tips for Moving Toward a More Plant-Based Diet]

"Our findings underscore the opportunity to reduce cancer burden and disparities in the United States by improving food intake," study lead author Fang Fang Zhang, a cancer and nutrition researcher at Tufts University's Friedman School of Nutrition Science and Policy, said in a statement.

The researchers looked at data from two national surveys on Americans' diets and, using a computer model, linked this with reported U.S. cancer cases in 2015. The model also included data from the World Cancer Research Fund on the link between diet and cancer.

Middle-age adults (ages 45 to 64) had the highest proportion of diet-related cancers, compared with other age groups.

Among the seven dietary factors, low whole grain and low dairy intake were linked with the most cancers, followed by high processed meat intake.

"Our results call for nutrition policies to address the U.S. cancer burden" related to diet, for example, by including government-backed, standardized labels for whole grains on foods, and warning labels for processed meats, the authors said.

The researchers note that their model assumed that each dietary factor had an independent effect on cancer risk, and they were not able to account for potential interactions among the dietary factors that may affect cancer risk.