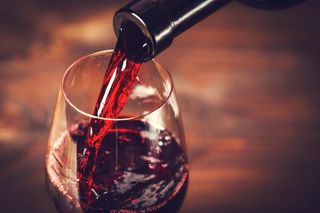 Drinking less alcohol may be linked to a lower risk of cancer, a new study suggests.

In the study, researchers found that people who drank some alcohol had a lower risk of cancer and death from any cause during a nine-year period than those who drank more or none.

However, the study found only an association between alcohol and cancer and death, and did not prove cause and effect, the researchers said.

What sets the new study apart, said lead study author Andrew Kunzmann, a postdoctoral research fellow at Queen's University Belfast in Ireland, is that previous studies have tended to look at cancer and mortality separately. [7 Ways Alcohol Affects Your Health]

"What our study does is combine the two outcomes together and [finds] that lighter drinking is associated with the lowest risk of cancer or death," Kunzmann said. And those who had no drinks or more than one drink a day were more at risk for death or cancers, most commonly esophageal and liver cancer and cancers of the head or neck regions, Kunzmann said.

In the study, the team analyzed data about lifetime alcohol use from questionnaires that were given to the nearly 100,000 participants in the United States between 1998 and 2000. The questionnaires were given at the beginning of the study and asked how many drinks a person had a week at present and with what frequency over the previous year. The researchers also looked at data on the number of primary cancer diagnoses (meaning it was the first time the person had been diagnosed with cancer) and deaths that occurred in the cohort over the next nine years.

"The study results suggest that minimizing alcohol intake may help individuals who already drink to lower their risk of developing certain types of cancer, such as breast, colorectal and liver cancer," Kunzmann said in a statement. "The results perhaps also suggest that [decisions about] drinking that second glass each night shouldn't be made for health reasons."

But Kunzmann noted that the participants were all older adults. That means that "we're not really reflecting what happens in younger people if they drink," he said. Also, it's difficult to account for other lifestyle factors that could have affected the results.

"Light drinkers tend to be more wealthy or lead healthier lifestyles in a number of ways than never drinkers," he said, and these factors could also influence health. But the results did take into consideration differences in diet, smoking and education among participants, Kunzmann noted.

In general, most people agree that "if you drink alcohol, drinking less reduces your risk" of health problems, including cancer," said Dr. Timothy Naimi, an alcohol epidemiologist at Boston Medical Center who was not involved with the study. But there could be other factors that "may make light drinkers 'appear' to be better off statistically, because they are socially advantaged," he told Live Science.

The researchers said that they hope their study sparks conversation about reducing the recommended alcohol intake in countries' guidelines. The U.K. guidelines, for example, recommend that both men and women should have fewer than six drinks a week (less than one drink a day), whereas the U.S. guidelines state that men shouldn't have more than two drinks a day and women no more than one, according to Kunzmann.

However, public health guidelines take into account many more factors than the study authors did, Kunzmann said. And the team cautioned that nobody really knows why light drinking might have a benefit such as cardiovascular protection or even if the results are caused by unrelated factors such as being more health-conscious.