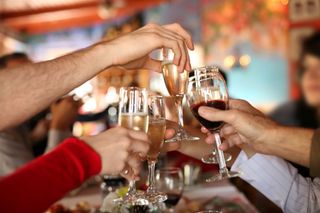 Alcohol use accounted for roughly 3.5 percent of all cancer deaths in the United States in 2009, a new study finds.

This amounts to nearly 20,000 Americans who lost their lives to cancer that year as a result of drinking.

Researchers also found that alcohol is a leading contributor to premature death from any cause, and they estimated that each alcohol-related cancer death resulted in 18 years of potential life lost. In other words, a woman who dies from alcohol-related breast cancer at age 60 likely would have lived until age 78 had cancer not cut her life short.

"Alcohol is a known cancer-causing agent in humans, but it has been severely overlooked as a preventable cause of cancer deaths," said study co-author Timothy Naimi, a physician and alcohol researcher at Boston University Medical Center. "People need to know the impact of alcohol on cancer deaths because it's another reason why they should not drink excessively."

Before now, the last estimate of alcohol-related cancer deaths was made more than 30 years ago, according to the study. And the difference between that finding — 3 percent — and the latest one reflects how little progress the country has made.

Worldwide, 4 percent of all cancer deaths are due to alcohol use reports the study, which appears online today (Feb. 14) in the American Journal of Public Health.

For the study, scientists examined seven different types of cancer in which alcohol is a known risk factor: cancers of the oral cavity and pharynx, larynx, esophagus, liver, colon, rectum and female breast.

But calculating the number and percentage of cancer deaths from alcohol use is complicated. To do so, the researchers reviewed U.S. mortality data from 2009 for all seven of these cancers. They also analyzed previous cancer studies that estimated the number of deaths that could be attributed to alcohol. In addition, they examined alcohol sales figures from 2009 and two large nationwide surveys of alcohol consumption levels in adults.

Among men, cancers of the upper airway (meaning the oral cavity and pharynx or the larynx) and the esophagus were the most fatal cancers pegged to alcohol. They killed approximately 6,000 men.

Although it's not exactly clear why alcohol increases cancer risk, one theory is that it damages DNA material in cells.

According to Naimi, there is a strong relationship between cancer and alcohol, yet reducing its consumption is not always emphasized as a cancer prevention strategy.

"This reflects a public health blind spot," he said.

Perhaps that's because alcohol's cancer-causing properties tend to be downplayed, while its cardiovascular benefits often get played up.

Despite some evidence of the heart-protective effects of moderate drinking, "overall, alcohol kills many times more people than it saves," said Naimi. But all of us like the idea that something pleasurable, be it alcohol, chocolate, coffee, or sex, is good for us, he suggested.

Although the study found that people who drank more alcohol – three or more drinks a day – had the highest number of cancer deaths, even regular, low-dose consumption increased risk. Approximately 30 percent of alcohol-related cancer deaths in 2009 occurred in people who had downed one and a half drinks a day or less.

When it comes to alcohol and cancer, there is no safe or beneficial amount, Naimi explained. For those who occasionally like to raise a glass, drinking less is better than drinking more, he said.

Pass it on: Even small amounts of alcohol up the risk of dying from cancer.