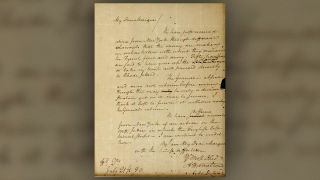 This letter, penned by Alexander Hamilton to the Marquis de Lafayette in 1780, was stolen from the Massachusetts Archives more than six decades ago. The pilfered document finally resurfaced at an auction house last year, and federal prosecutors are now demanding it back.
(Image: © AP/Shutterstock)

History had its eyes on Alexander Hamilton — and now, federal agents have their eyes on one of the Founding Father's long-lost letters, penned in 1780 and stolen from the Massachusetts Archives more than six decades ago.

According to the Associated Press (AP), the letter from Hamilton to his revolutionary comrade the Marquis de Lafayette was stolen from the archives by an employee sometime between 1937 and 1945. The thief also made off with historical documents written by George Washington, Benjamin Franklin and Paul Revere; by the time the employee was arrested in 1950, many of the stolen artifacts had already been sold to rare book dealers around the United States.

The Hamilton letter was never recovered. It resurfaced for the first time in November 2018, when a South Carolina family submitted the letter to an Alexandria, Virginia, auction house in hopes of selling the document. The letter was valued at $25,000, the website MassLive.com reported, before auction house researchers discovered the item's dubious provenance. The auction house promptly contacted the FBI.

On Wednesday (May 15), prosecutors at the U.S. Attorney's Office in Massachusetts filed a federal forfeiture complaint to get Hamilton's missive back in government hands, the AP reported.

In the newly resurfaced letter, dated July 21, 1780, Hamilton alerts his "Dear Marquis" to news of British troop movements in the midst of the American Revolutionary War. At that time, British surrender and the war's end were still several years away. Hamilton was serving as Gen. Washington's aide-de-camp (aka, his right-hand man).

You can read the full, brief text of the letter here.