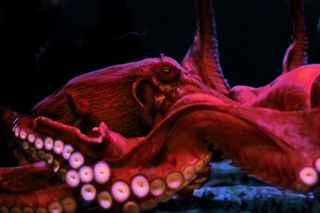 Turning light particles into visual information is hard work, and your body relies on oxygen to get the job done. This is true whether you walk the land on two limbs or swim through the sea with eight.

In fact, according to a recent study in the Journal of Experimental Biology, the amount of oxygen available to marine invertebrates like squids, crabs and octopuses may be far more important to their vision than previously thought. In the study, published online April 24, researchers saw a significant drop in retinal activity in four species of marine larvae (two crabs, an octopus and a squid) when the animals were exposed to reduced-oxygen environments for as little as 30 minutes. [8 Crazy Facts About Octopuses]

For some species, even a minuscule drop in oxygen levels resulted in almost immediate vision loss, eventually causing near-total blindness before the oxygen was cranked back up again.

According to lead study author Lillian McCormick, a doctoral candidate at the Scripps Institution of Oceanography in La Jolla, California, some form of vision impairment may be a daily reality for these species, which migrate between the ocean's highly oxygen-saturated surface and its hypoxic (low-oxygen) depths during their daily feeding routines. And as ocean oxygen levels continue to drop around the globe, in part due to climate change, the risks to these creatures could intensify.

"I am concerned that climate change is going to make this issue worse," McCormick told Live Science, "and that visual impairment might happen more frequently in the sea."

To poke a cephalopod in the eye

For the new study, McCormick and her team investigated the market squid (Doryteuthis opalescens), two-spot octopus (Octopus bimaculatus), tuna crab (Pleuroncodes planipes) and graceful rock crab (Metacarcinus gracilis). These species are all local to the Pacific Ocean off of Southern California, and they all engage in a daily diving routine known as vertical migration. By night, they swim near the surface to feed; by day, they descend to greater depths to hide from the sun (and the hungry predators it brings).

As these creatures migrate up and down the water column, the oxygen availability changes dramatically. The ocean is replete with oxygen near the surface, where air and water meet, and significantly less saturated with oxygen at 165 feet (50 meters) below the surface, where many crustaceans and cephalopods hide away during the day. [No, Octopuses Don't Come from Outer Space]

To find out whether these daily swings in oxygen affect the animals' vision, McCormick attached small electrodes to the eyes of each one of her test larvae, none of which measured longer than 0.15 inches (4 millimeters). These electrodes recorded the electrical activity in each larva's eyes as its retinas reacted to light —"kind of like an EKG [electrocardiogram], but for your eyes instead of your heart," McCormick said.

Each larva was then placed in a tank of water and made to look at a bright light while the water's oxygen level was steadily decreased. Levels fell from 100% air saturation, oxygen levels you'd expect to find at the surface of the ocean, down to about 20% saturation, which is lower than what they currently experience. After 30 minutes of this low-oxygen condition, the oxygen levels were increased back to 100%.

While each of the four species showed a slightly different tolerance, all four took a marked blow to vision when exposed to the low-oxygen environment. Overall, each larva's retinal activity dropped between 60% and 100% in low-oxygen conditions. Some species, particularly the market squid and the rock crab, proved so sensitive that they started losing their vision as soon as the researchers started decreasing the oxygen in the tank.

"By the time I reached the lowest oxygen levels, these animals were almost blinded," McCormick said.

The good news is that the vision loss wasn't permanent. Within about an hour of returning to a fully saturated oxygen environment, all of the larvae regained at least 60% of their vision, with some species bouncing back to 100% functionality.

Blind in the water

It's likely that because the Pacific naturally experiences a lot of low-oxygen conditions near Southern California, these highly sensitive species grapple with some form of vision impairment every day, McCormick said. (More research is needed to know for sure, though.) Hopefully, McCormick added, these at-risk species are naturally developing avoidance behaviors so that they swim to higher-oxygen parts of the ocean when severe vision impairment sets in.

However, McCormick said, rapid deoxygenation caused by climate change could make it harder for these species to adapt. According to a 2017 study in the journal Nature, total ocean oxygen levels have declined by 2% globally in the last 50 years and are projected to decline by up to an additional 7% by the year 2100. Climate change is a significant factor driving these losses, the Nature study found, especially in upper parts of the ocean, where the larvae McCromick studied tend to spend most of their lives.

This warming-induced deoxygenation — coupled with natural forces like wind and water circulation patterns that make near-surface oxygen levels inconsistent in the region — could result in more vulnerable creatures losing their vision when they need it most. At-risk animals could become less effective at hunting for food near the surface, and might miss subtle signs of predators in their midst, McCormick said. It’s a grim possibility — however, more research is needed to determine the amount of oxygen-related vision loss it really takes before these creatures make potentially harmful mistakes.

"If I take out my contact lenses at home and walk around, I might stub my toe, but I'll get by," McCormick said. "The next question is, how much retinal impairment equals a change in visual behavior?"

Editor's Note: This story was updated to correct the measurement of the larvae. They are less than 0.15 inches, not 1.5 inches, long. The story was also updated to note that marine invertebrates typically don't experience 20% oxygen saturation in their normal environment.