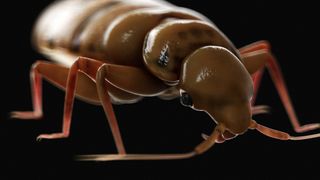 Should you ever have to endure the nightmare of a bedbug infestation, take solace that, perhaps, a pterodactyl once had to deal with the same annoyance.

A new study published today (May 16) in the journal Current Biology has found that bedbugs have existed in one form or another for 115 million years, putting the pernicious parasites on Earth at the same time as the dinosaurs.

To rebuild the bedbug lineage, a team of researchers spent 15 years collecting wild bedbugs from around the world and studying specimens in museum collections. The team compared the DNA of these modern buggos to see how different species diverged in the past, and how often new species arose to pester humans and other potential hosts.

"The first big surprise we found was that bedbugs are much older than bats, which everyone assumed to be their first host," lead study author Steffen Roth, from the University Museum of Bergen in Norway, said in a statement. Roth and his colleagues found, in fact, that bedbugs beat bats to the planet by a solid 50 million years. These ancient bedbugs were specialized to parasitize a single host, Roth said — however, it's not clear what that host was. [Bedbugs: The Life of a Mini-Monster (Infographic)]

Is it possible a T. rex or a brontosaurus ever had to kick a horde of bedbugs out of their campsites? It's unlikely, the researchers said, as bedbugs prefer to leech off animals that have a "home," such as a bird's nest, a bat's roost or your cozy queen-size mattress. Most dinosaurs, on the other hand, tended not to settle down, choosing rather to hunt in herds and migrate from place to place.

That's good news for dinos, but bad news for home-dwelling humans. The researchers also found that two species of modern, human-biting bedbugs have been on the planet far longer than we Homo sapiens, contradicting the theory that these age-old pests evolved into new species specifically to suck our blood.

The researchers now want to learn more about how these ancient critters developed the traits needed to suck the world's blood for so long — and, hopefully, help humans figure out better ways to control them.