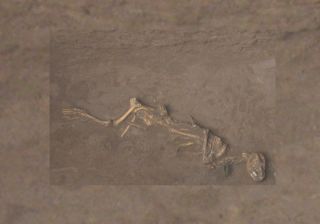 A Bronze Age dog found buried with a bell around its neck at the site of Sipanmo in Anyang, China.
(Image: © Roderick Campbell)

Life was short and sometimes brutal for many of the dogs of China's Shang Dynasty. New research shows that most of the canines sacrificed during this Bronze Age were just puppies, with some of them buried alive.

The Shang Dynasty ruled China's Yellow River Valley between 1600 B.C. and 1046 B.C., the second of China's dynasties, following the Xia, which was established around 2070 B.C. The Shang practiced both animal and human sacrifice, disposing of sacrificial remains in burials pits, or laying the sacrifices to rest in the tombs of the dead. Dogs, in particular, were often buried in pits just below the torso of the deceased, perhaps to act as an eternal guard in the afterlife.

Surprisingly, though, most of these eternal guard dogs were puppies, said Roderick Campbell, an archaeologist at New York University's Institute for the Study of the Ancient World. [25 Cultures That Practiced Human Sacrifice]

"Puppies, that sounds horrible," Campbell told Live Science. "Why would you sacrifice a cute little puppy? On the other hand, if it's not your puppy and if you're living in a society where you don't have the same assumptions of dogs and cuteness … it's a cheaper investment in the animal. You don't have to raise it yourself."

Campbell and his colleague Zhipeng Li of the Chinese Academy of Social Sciences rounded up data from multiple Shang Dynasty sites where dog sacrifices occurred and published the research in March in the journal Archaeological Research in Asia. It's difficult for foreign scientists to get excavation permits in China, Campbell said, so the data came largely from older finds by a variety of researchers.

Dogs, Campbell said, have been used in rituals in China for as long as archaeological evidence extends; there are dog burials dating back 9,000 years at the Neolithic settlement of Jiahu.

Pigs were also commonly sacrificed by the ancient Chinese, Campbell said. But over the course of the Bronze Age, he said, sheep, goats and cattle became more commonly sacrificed, perhaps because increasing trade ties with western Eurasia brought these animals to China's central plains. Inscriptions on oracle bones suggest that dogs continued to be sacrificed, particularly to the gods of the sky. It's possible, Campbell said, that these sacrifices to the sky gods were old traditions, established when dogs and pigs were the most common sacrificial animal.

In one find in the ancient city of Zhengzhou, archaeologists uncovered eight neatly arranged pits containing the remains of 92 tied-up dogs, some of which may have been buried alive. [Photos: Prehistoric Dog Graveyard Discovered in Siberia]

Dogs begin showing up in human tombs during the Erligang culture, which populated the modern-day province of Henan around 1500 B.C. These sacrifices were found in places similar to where human sacrifices might be found, Campbell said: buried below the tomb inhabitant or interred on a ledge or in a niche. The researchers at first assumed that these were beloved pets, sent with their masters to the afterlife. But an analysis of the bones found, instead, that 73% were less than a year old when they died, and 37% were younger than 6 months. If the dogs were pets, you'd expect them to be of all ages, Campbell said.

Instead, the dogs may have been stand-ins for human sacrifices, Campbell said. Shang Dynasty elites often sent concubines and slaves to their deaths, burying their bodies in the tombs of the rich and powerful. Many of these sacrifices were probably war prisoners, Campbell said. Their bones suggest that the sacrifices often came from elsewhere and had been poorly treated, sometimes for years, before being executed.

For the less-well-off, dogs might have made a cheaper alternative. Canines have always played a different role in human history than livestock — like pigs or cattle.

Dog sacrifice substituting for human sacrifice would fit with other trends seen in the Shang Dynasty, Campbell said. For example, people were sometimes buried with miniaturized ceramics or fake bronzes for the afterlife, rather than real goods. Even today, traditional Chinese funeral practices involve burning paper items and fake money as a symbolic offering, Campbell said. A puppy might be a miniature stand-in for a full-grown guard dog (or guard human).

In the days before spaying and neutering, puppies may have also been easy to come by. Campbell and Li estimate that a mere 500 adult dogs could have provided enough pups to supply the sacrificial needs of the Shang at any given time. It's possible, Campbell said, that dogs were raised specifically for sacrifice. Alternatively, the puppies may simply have been unwanted strays, rounded up whenever the need arose.

"From a Bronze-Age economic perspective, that seems like a likely avenue," Campbell said.

Still, there are a lot of questions about Shang Dynasty practices, particularly how or if ordinary rural people practiced these same sacrificial traditions.

"We've been focused on palaces and kings for pretty much 100 years in Shang studies," Campbell said. "I think that's given us a really warped perspective on that society. I would really like to see more work done on villages."