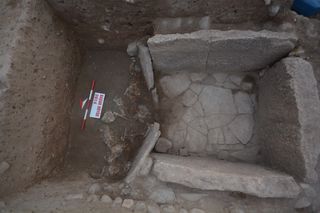 Eight human sacrifices were found at the entrance to this tomb, which held the remains of two 12-year-olds from ancient Mesopotamia.
(Image: © Photograph by permission of the Ba ̧sur Höyük Research Project; Antiquity 2018)

About 5,000 years ago, the Mesopotamians buried two 12-year-olds — a boy and a girl — and surrounded their slender bodies with hundreds of bronze spearheads and what appears to be eight human sacrifices, a new study finds.

The eight human sacrifices were positioned just outside the tomb, located at the site of Basur Höyük in southeastern Turkey, the researchers said. The team determined the age of six of the human sacrifices and found that the victims ranged in age from 11 to 20 years old.

These two 12-year-olds, along with the eight human sacrifices, "had been deposited in a single event, and furnished with an unprecedented number of high-status grave goods for the period and the region," the researchers wrote in a study published online yesterday (June 28) in the journal Antiquity.

The mysterious tomb was discovered in 2014, said the study's two researchers, Brenna Hassett, a post-doctoral researcher of archaeology at the Natural History Museum in London; and Haluk Sağlamtimur, an archaeology professor at Ege University in Izmir, Turkey. [25 Cultures That Practiced Human Sacrifice]

The remains of an adult were also found beside the two children, but that body could have come from an earlier burial that got mixed in with the two 12-year-olds, Hassett told Live Science.

And while the evidence isn't 100 percent clear, scientists are fairly certain that the eight people were sacrificed.

"While we only have evidence for violent trauma on two of the skeletons, it's important to remember that violent death doesn't always leave a mark on the skeleton," Hassett said. "As a grim example, stab wounds are normally aimed at the soft parts of the body, which do not preserve."

She added that "from the careful dressing and positioning of the bodies outside the door to the main chamber, it seems all eight would have been retainer sacrifices." The term ‘retainer sacrifice’ refers to people who were sacrificed so that they can accompany or serve others to the afterlife.

The human sacrifices were buried with textiles, beads and ceramics.

The discovery leaves archaeologists with a series of mysteries. Who were the two 12-year-olds who seem to be the focus of the burial? Were they also sacrificed? What's more, why was human sacrifice carried out at all at this site?

"Unfortunately, preservation wasn't great inside the chamber, so we don't have any evidence that the [two 12-year-old] children were sacrificed," Hassett said. But because the two 12-year-olds received such an elaborate burial, it appears that they must have "held an important biosocial status," Hassett and Sağlamtimur wrote in the study.

Archaeologists know that human sacrifices also occurred at other sites in Mesopotamia, including a nearby site called Arslantepe that also dates back to roughly 5,000 years ago.

"One thought is that what we are witnessing at Basur Höyük is part of a phenomenon we see in other societies across the globe, where power is being consolidated into a more structured, formal hierarchy; what archaeologists would call ‘early states,'" Hassett said.

"Perhaps [what] we are seeing is a display of power by an increasingly hierarchical society; the power to dispose of great wealth — and even people — might be the same kind of power you need to show to build a state-like society," Hassett said. "It's a truly fascinating puzzle that will hopefully tell us more about how human societies form and change."

In the future, the team plans to do stable isotope analyses (a kind of study that provides information on the birthplace and diet of the deceased individuals) and DNA studies on the skeletons.