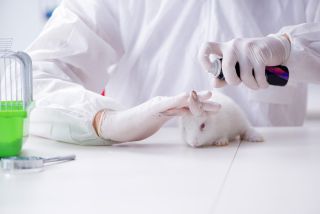 Will animal research ever be replaced by other methods?
(Image: © Shutterstock)

In 1980, The New York Times featured a full-page ad from an animal rights group, which lambasted a prominent cosmetics company for testing its products on the eyes of rabbits. The campaign was so effective, it led to several beauty companies pledging hundreds of thousands of dollars toward research to find alternative testing methods that didn't involve animals.

Almost 40 years later, what are some of these alternatives, and how much progress have we made?

Before we delve into the answer, there's one important distinction to make: although "animal testing" usually conjures up the image of defenseless rabbits being prodded and poked in the name of beauty, the use of animals in research — and the search for alternatives — stretches far beyond the cosmetics industry. Animals like mice and rats are widely used in toxicology, the study of chemicals and their effects on us. Animals are also a crucial to drug discovery and testing. In biomedical research, animal models are the foundation of many experiments that help researchers investigate everything from the functioning of circuits in the brain to the progression of disease in cells. [Do Animals Get Seasick?]

Despite their importance in these fields, there are now efforts to reduce the number of animals used in testing. That's due, in part, to ethical concerns that are driving new legislation in different countries. But it also comes down to money and time.

"In theory, non-animal tests could be much cheaper and much faster," said Warren Casey, the director of the U.S. National Toxicology Program's Interagency Center for the Evaluation of Alternative Toxicological Methods, which analyzes alternatives to animal use for chemical- safety testing.

Another concern is that in some types of research, animals are too different from humans to successfully predict the effects that certain products will have on our bodies. "So we've got ethics, efficiency and human relevance," Casey told Live Science, the three main factors driving the hunt for alternatives.

So, what are the most promising options so far?

One approach is to replace animals with algorithms. Researchers are developing computational models that crunch huge quantities of research data to predict the effects of certain products on an organism.

"This is a very applicable approach. It's very cheap," said Hao Zhu, an associate professor of chemistry at Rutgers University in New Jersey. Zhu is part of a research team that has developed a high-speed algorithm that extracts reams of information from online chemical databases, to compare thousands of tested chemical compounds with new, untested ones by identifying structural similarities between them. Then, it uses what we know about the toxicity of the tested compounds to make reliable predictions about the toxicity of the untested varieties with a similar structure (assuming that this shared structure means the compound will have similar effects).

Typically, identifying the effects of a new compound would require scores of expensive, time-consuming animal tests. But computational predictions like this could help to lessen the amount of animal research required. "If we can show that the compound we want to put onto the market is safe, then I think these kinds of studies could be a replacement for current animal studies," Zhu said. A similar study from researchers at Johns Hopkins University in Maryland showed that algorithms could even be better than animal tests at predicting toxicity in various compounds. [How Psychedelic Drugs Create Such Weird Hallucinations]

In recent years, scientists have started growing cultured human cells on scaffolds embedded on plastic chips, forming tiny structures that mimic the functioning of our heart, liver, kidneys and lungs. Known as organs-on-a-chip, these could provide a novel way to test the effects of new compounds or drugs on human cells.

Testing on these simplified, miniaturized versions of our physiology could deliver more human-relevant results than animal experiments. Crucially, the tests could also replace the use of whole animals in the exploratory stages of early research, when scientists don't necessarily need to test on whole systems. Organs-on-a-chip "for the most part address a single output or endpoint," Casey said — because all that may be required at this early stage is to test the behavior of one cell type in response to a drug or a disease, as a way to guide future research.

This could "help in most cases to reduce the amount of animal tests researchers are planning within ongoing projects," said Florian Schmieder, a researcher who is working on that goal by developing miniature kidney and heart models at the Fraunhofer Institute for Material and Beam Technology, in Germany. As well as lungs, livers and hearts, some companies are developing artificial 3D structures that replicate human skin. That's particularly important in toxicology, where animal skin tests have long been a baseline for understanding the effects of new, untested compounds.

Replacing this with a harm-free model is now a reality, Casey said: "Skin tissue models have really proven to be pretty effective. They can provide insight on the acute changes — whether something's going to be corrosive and damage skin."

One idea that's frequently raised as a counter to animal testing is that if humans want to benefit from new treatments, drugs and research, we should instead offer ourselves as the test subjects. That's quite a simplified and extreme view — and in most countries animal tests are required by law before drugs are given to humans, for instance. So it isn't necessarily practical, either.

But, there are carefully controlled forms of human testing that do have the potential to reduce animal use, without endangering human health. One such method is microdosing, where humans receive a new drug in such tiny quantities that it doesn't have broad physiological impacts, yet there's just enough circulating in the system to measure its impact on individual cells.

The idea is that this cautious approach could help eliminate nonviable drugs at an early stage, instead of using thousands of animals in studies that may only establish that a drug doesn't work. The approach has proved safe and effective enough that many major pharmaceutical companies now use microdosing to streamline drug development. [Why Do Medical Researchers Use Mice?]

"There will of course be ethical concerns, but these could easily be outweighed by the potential gains in bringing safer and more effective medicines to market more efficiently," Casey said.

Where are we now?

So, what do these alternatives mean for the future of animal testing? In some areas of research like cosmetics testing — where so many existing products have already been proved safe through animal studies — there's a growing recognition that testing new products is something we really don't need to advance this industry. That's borne out by regulations like the one put forward by the European Union, which now bans animal testing on any cosmetic products that are produced and sold within the EU.

We're also seeing advances in toxicology research. Toxicologists have long relied on six core animal-based tests that screen new products for acute toxicity — checking whether a product causes skin irritation, eye damage or death if consumed. But in the next two years, these baseline tests will likely be replaced with non-animal alternatives in the United States, Casey said. The reason for this progress is that the "biology underlying these types of toxicity is much simpler than other safety concerns that can arise after [an animal is] exposed to a chemical for an extended period of time, such as cancer or reproductive toxicity," Casey said.

But in other areas of research, where the questions being investigated are more complex, animal models still provide the only way we currently have of fully understanding the varied, widespread, long-term effects of a compound, drug or disease. "Physiology is really, really complex and we still don't have a handle on it" — nor anything that legitimately mimics it aside from animal models, Casey said.

Even despite the most promising advances like the development of organs-on-a-chip, that's still a long way from anything representing a connected human body. "The major problem in developing artificial organ systems is to gain the whole complexity of a living organism in vitro," Schmieder said. "The problem here is to emulate the kinetics and dynamics of the human body in a really predictive way."

While organs-on-a-chip and other inventions might help answer simpler questions, right now whole-animal models are the only way to study more complex effects — such as how circuit functions in the brain are linked to visible behaviors. These are the types of questions that help us understand human disease, and ultimately lead to lifesaving treatments and therapies. So, the animal experiments that underlie those discoveries remain crucial. [Do Animals Have Feelings?]

It's also worth noting that some of the most promising non-animal tests we have today — like algorithms — work only because they can draw on decades of animal research. And to advance in the future, we will need to continue this research, Zhu said.

"We can't use computers to totally replace animal testing. We still need some low-level animal testing to generate the necessary data," Zhu said. "If you asked me to vote for a promising approach, I would vote for a combination of computational and experimental methods."

So, are there alternatives to animal testing? The short answer is yes — and no. While we have several options, for now they're not sophisticated enough to eradicate animal testing. Crucially, however, they can reduce the number of animals we use in research. And with new regulations, and ever-smarter alternatives, we can at least be hopeful that in the future, the number of animals will continue to decline.