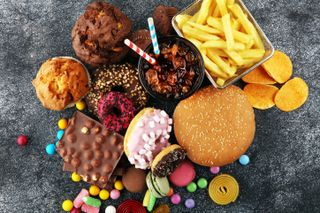 Sometimes, the only thing holding our sanity together on a stressful day is a string of fatty and sugary snacks, aka comfort food.

But a new study, conducted in mice, provides more evidence that stress eating — especially of high-calorie meals — leads to more weight gain than eating while, well, not stressed. Chronic stress turns on a key mechanism in the brain that prompts mice to keep eating, a group of researchers reported today (April 25) in the journal Cell Metabolism.

The team analyzed the behavior and weight gain of a group of mice. Researchers chronically stressed some of the mice by isolating them from other mice and replacing their bedding with a thin layer of water. The other mice were placed in typical, nonstressful living conditions. The researchers fed some of the mice in each group chow and others a high-fat diet. [11 Surprising Things That Can Make Us Gain Weight]

The investigators then peered into the mice brains to try to figure out the reasons for these differences.

The hypothalamus, a tiny area in the center of the brain (in both mice and humans), controls appetite and hunger, whereas the nearby amygdala controls emotional responses, such as anxiety and stress, according to a statement.

Following a hunch that this molecule could be driving the additional weight gain linked to stress, the researchers turned off the process that produces NPY in mice. When they blocked the ability of the amygdala to make this molecule in mice, the researchers found that the stressed and nonstressed mice on a high-calorie diet gained about the same amount of weight. This suggests that NPY does, in fact, drive the increased weight gain associated with stress eating.

That effect of NPY may involve an interaction with insulin. It turns out that these NPY molecules have docking stations for that hormone, which the body uses to control how much food mice (and humans) eat.

Insulin levels increase slightly right after a meal in order to help the body absorb glucose from the blood and signal to the hypothalamus to stop eating, according to the statement. The study showed that chronic stress resulted in slightly elevated insulin levels in the mice. But in stressed mice that were on a high-calorie diet, insulin levels were 10 times higher than in stress-free mice that ate the chow.

This high level of insulin circulating around the amygdala caused brain cells to become desensitized to the hormone. This, in turn increased the production of NPY and promoted eating, while decreasing the body's ability to burn energy, according to the statement.

It's unclear why the brain has such a mechanism, but a "lack of food and starving is stressful, so eating higher amounts under these conditions can be a survival advantage," said senior author Herbert Herzog, the head of the Eating Disorders laboratory at the Garvan Institute of Medical Research.

Even though this study was conducted in mice, since mice and humans use the same NPY system to regulate these processes, the situation is "very likely the same in humans," Herzog told Live Science. The researchers now hope to look at this pathway in more detail and search for any steps or molecules along the way that could be targeted for obesity intervention.