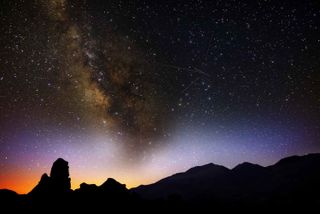 Springtime stargazers are in for a treat; the Lyrid meteor shower will peak in a dazzling show tonight and early Tuesday morning (April 22-23).

There's just one celestial object that might get in the way: the nearly full moon.

"This year, the moon is going to be a problem for prospective meteor watchers," because the moon will be so bright, Joe Rao, an instructor and guest lecturer at New York's Hayden Planetarium, wrote for Space.com, Live Science's sister site. "The best chance to see some Lyrids this year will be on the morning of April 23, just before morning twilight begins." [Photos: Super Blood Wolf Moon Eclipse Stuns Viewers]

The Lyrids, one of the oldest known meteor showers, peak every year during late April, according to NASA. The first people to make note of these streaks of light were the Chinese in 687 B.C., which means that skywatchers have known about the Lyrids for at least 2,700 years.

Why does this meteor shower happen annually? Basically, the comet known as C/1861 G1 Thatcher — named after A.E. Thatcher, who discovered it in 1861 — left behind space debris as it zoomed through space, NASA reported. This debris is mostly made of dusty comet particles. Every April, during Earth's rotation around the sun, our planet passes through these particles, which then collide with Earth and burn up in the atmosphere, leaving blazing streaks across the night sky.

While stunning, the Lyrids aren't the flashiest meteor shower visible from Earth. That honor usually goes to the Perseids, which shine every August. That said, while the Perseids have between 50 to 100 meteors (also known as shooting stars) per hour, the Lyrids are still impressive in their own right, with about 10 to 20 meteors per hour during their peak.

If you're in the Northern Hemisphere, the best way to get an eyeful of these meteors is to go outside at night, away from light pollution. Give your eyes time to adjust to the darkness as you get comfortable on a lawn chair or blanket. Then, look up with your feet facing east, gazing at as much of the night sky as you possibly can. (Binoculars are not advised, as they can limit your field of view.)