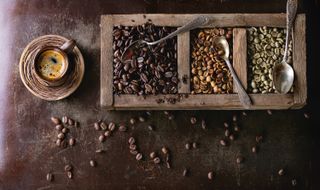 Goethe, who wrote the tragedy "Faust," was one of Germany's most famous authors, but he also dabbled in natural science. In 1819, Goethe saw the chemist Friedlieb Ferdinand Runge demonstrate how deadly nightshade extract could dilate a cat's pupils. Impressed, Goethe gave Runge a small box of coffee beans from Greece and tasked the chemist with figuring out why the stuff kept him up at night.

A couple of years later, Runge became the first scientist to isolate and identify caffeine. (Those who are extra-sensitive to the jittery effects of a cup of strong coffee probably won't be surprised to hear that the discoverer of the stimulant had a penchant for working with deadly substances; his colleagues and students allegedly nicknamed him "Doktor Gift," which means "Dr. Poison" in German.) [Does Medicine Really Expire?]

According to the Max Planck Institute, it took almost another 100 years after Runge's discovery before scientists figured out how to extract caffeine from coffee and still have a beverage that tasted somewhat like the real thing.

Today, decaffeination is an intensive process that takes place at specialized facilities.

"There are a couple [of] very large [coffee] companies that own their own decaf plants, but beyond that every other company either contracts directly with a decaffeination company or they contract through an importer," David Kastle, a senior vice president at the Canada-based company Swiss Water Decaffeinated Coffee, told Live Science.

Generally, decaffeination involves water-logging coffee beans when they're still green (before roasting) so that the caffeine inside can be made soluble, meaning that it can be dissolved. But there are different ways of washing that caffeine out of the beans.

The first commercially successful decaffeination method was invented around 1905, by German coffee merchant Ludwig Roselius. According to Atlas Obscura, one bit of lore about the origins of decaf claims that Roselius received a shipment of coffee beans that was soaked in seawater. Instead of tossing the beans, Roselius decided to process and test them. He found that the coffee had been stripped of its caffeine content but still basically tasted like coffee, albeit a bit salty.

Roselius then figured out he could use benzene — a chemical that, at the time, was also used in paint strippers and aftershave — as a solvent to remove caffeine from coffee beans. His company, Kaffee HAG, was the first to produce instant decaf coffee. The coffee was sold as "Sanka" in the United States by General Foods, and was a mid-20th-century staple — and occasional punchline. (In the 1982 movie "Fast Times at Ridgemont High," a biology teacher pleads with his students, "I'm a little slow today. I just switched to Sanka, so have a heart.")

Benzene is no longer used for decaffeinating coffee because it's a known carcinogen. Instead, companies that use chemical solvents have switched to other substances, predominantly ethyl acetate and methylene chloride, although there has been some controversy about the latter because exposure to high amounts of the substance can be toxic and lead to damage of the central nervous system. The FDA has ruled that miniscule trace amounts of methylene chloride in decaf coffee are not cause for concern, and residues of more than 0.001% are prohibited.

Another method for decaffeinating coffee also originated, somewhat accidentally, in Germany. Chemist Kurt Zosel was working with supercritical carbon dioxide at the Max Planck Institute for Coal Research in Ruhr. Zosel discovered that when the gas is heated and put under a lot of pressure, it enters a supercritical state that can be useful for separating different chemical substances — including separating caffeine from coffee when it's pumped through the beans.

The chemist patented his decaffeination method in 1970; it's still widely used today. According to NPR, crude caffeine can be salvaged during the supercritical carbon dioxide decaffeination process, which is used in sodas, energy drinks and other products.

Yet another method, dubbed the Swiss Water Process, was first used commercially in the 1970s. Kastle explained that first, a batch of green coffee beans is soaked in water. That water becomes saturated with all the soluble components found in coffee — including chlorogenic acid, amino acids and sucrose; the caffeine is then filtered out with carbon. This uncaffeinated liquid, called green coffee extract, is then added to columns of new, rehydrated, green coffee beans that still have their caffeine. Kastle said that caffeine migrates from the beans to the green coffee extract as the beans and liquid seek equilibrium, until the beans are almost entirely caffeine-free.

According to Consumer Reports, it can be difficult to figure out the process by which your decaf coffee has been made; there are no specific labeling rules that require companies to disclose this information. Some coffee companies do, however, advertise their methods. (The high-end coffee company Blue Bottle, for instance, flaunts its use of the Swiss Water Process in making its decaf.)

And the FDA says that decaffeinated coffee might still contain small amounts of caffeine, warning consumers that an 8-ounce cup of decaf typically has 2 to 15 milligrams of caffeine. But that's still much lower than a caffeinated cup of joe; for comparison, the same amount of regular coffee usually has about 80 to 100 mg of caffeine.