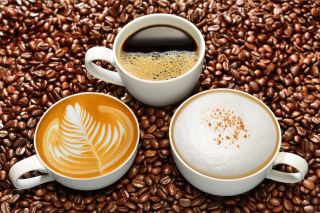 Absolutely — but don't lock up your coffee pot just yet.

Experts say you'd have to drink 80 to 100 cups of coffee in quick succession, which equals about 6 gallons (23 liters) of coffee, or 10 to 13 grams of pure caffeine. And even if you could drink that much coffee, the excessive amount of water trapped in your body would kill you first by diluting essential nutrients in your bloodstream.

In spite of the low likelihood of coffee sending you to your grave abruptly, there have been popular close calls. While it takes a lot to kill, it can take significantly less to cause ill effects, and long-term effects of caffeine remain somewhat unclear.

This month, according to news accounts, a young United Kingdom woman drank seven double-shots of espresso in four hours. The barista binge sent her gasping for breath with a racing heart on the way to the emergency room. She fully recovered within a day from the overdose, and doctors explained she had ingested three times the safe daily amount of caffeine (about 300 milligrams or two to three coffee cups worth of caffeine). [Why Does Coffee Make You Poop?]

If our espresso-fanatic woman was a man, however, the situation could have been more dire, as females can break down caffeine 25 percent faster than males (sorry guys).

But how, exactly, can the world's most popular drug kill?

Like other stimulants, caffeine raises blood pressure, boosts heart rate and temporarily shrinks blood vessels. In excess, the effects can be deadly by causing a heart attack, stroke or other cardio-vascular-related problem.

Researchers think daily caffeine intake can increase the risk of coronary heart disease, but the results so far have been inconclusive.