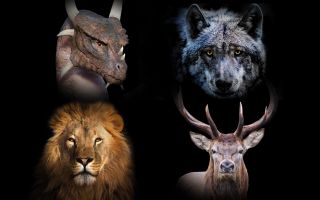 Animals representing noble houses in "Game of Thrones" are all deadly in combat.
(Image: © Shutterstock)

For nearly a decade, would-be kings and queens in HBO's "Game of Thrones" have stabbed, slashed and poisoned their way toward a seat on the Iron Throne. And the fierceness of the human combatants mirrors the ferocity of the animals displayed on these leaders' banners.

Each of the show's dominant houses is represented by an animal: a dire wolf for House Stark, a lion for House Lannister, a stag for House Baratheon, and a dragon for House Targaryen. All of these creatures were likely chosen as house sigils because they are fierce and deadly fighters.

But which one is really the fiercest and deadliest of them all? Who would be the last one standing in the ultimate face-off between a lion, a dire wolf, a stag and a dragon? [Move Over, 'Game of Thrones': 9 Real-Life 'Dragons']

Let’s be real: Overcoming the dragon — which far outclasses the field in size, strength, weapons and defense — is the biggest obstacle for all of the other animals, said biologist Katie Hinde, an associate professor at Arizona State University. Hinde is the creator of March Mammal Madness (MMM), an annual event that pits brackets of mammals (mostly) in fictional battles to determine the ultimate champion.

One way the other animals could win is if the dragon lost the will to fight. For instance, in "Game of Thrones," the dragons are strongly bonded to their "mother," Daenerys Targaryen; one of them might abandon a battle if his mother were absent, Hinde told Live Science.

Another consideration could be the dragon's energy level; as they likely require a lot of food to fuel their flight and fire production, hunger could impact their willingness to engage in combat, said Marc Kissel, a lecturer in anthropology at Appalachian State University in North Carolina.

Kissel, who narrated several MMM 2019 matchups, told Live Science that a dragon might "lose" a battle with a lion or dire wolf by flying away in search of an easier, more nutritious meal.

And if the dragon were grounded and really weak from hunger, "it might be possible for one of the carnivores to do some damage," Brian Tanis, an MMM narrator and a doctoral candidate in biology at Oregon State University, told Live Science in an email.

What about the other animals? A stag might be able to kill a dire wolf or lion with its antlers — in the show's first episode, the Starks discovered a dead dire wolf with an antler embedded in its body — or it could forfeit the match by running away. Carnivores can't kill what they can't catch, and more than half of predator attacks end with their prey's escape, Hinde said.

However, the stag is also the only competitor that could potentially defeat the dragon, she added.

When a lion attacks, it usually leaps at its prey to deliver a powerful bite to the neck. While a lion's jaws certainly could rip out the throat of a stag or wolf, its teeth couldn't penetrate the dragon's scales, Hinde said.

But the sharp tines of a stag's antlers could possibly puncture dragon armor — provided that there was already a worn area, or a gap between the scales, and if the stag evaded the dragon's fire, Hinde said. However, the force needed for a fatal blow would require the dragon to fall out of the sky and impale itself onto the stag's antlers, eliminating both stag and dragon.

With the dragon out of the way, the dire wolf could square off against the lion. A pack of dire wolves would almost certainly defeat a lion, but a lone wolf would be at a disadvantage, as these animals typically hunt as a team, Hinde said. In a one-on-one confrontation, the lion could easily emerge the victor — much as House Lannister has done for much of the series.

So, when the dust finally settled on this battlefield, who would be left? While certain circumstances might favor the lion, the dragon would most likely crush (or burn) the competition, experts (and Live Science editors) all agreed.

"They've got incredible armor, they can fly and they have fire, which gives them the capacity to do damage from a distance," Hinde said. "That's always going to be really tricky to defeat."