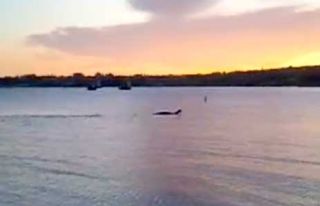 A still shot from the newly posted video that some think shows a monster in Lake Champlain in Vermont.
(Image: © YouTube)

When scientists visit a tucked-away part of the planet—say, a deep-ocean hydrothermal vent or an isolated jungle mountain—they routinely find dozens of species that have never been documented. It's discoveries like these that allow folks who believe in mythical beasts such as Bigfoot, the Loch Ness Monster and El Chupacabra to hold out hope that these creatures actually do exist.

In most cases, hope is all they have, as the scientific evidence for these 10 animals of urban legend simply isn't very convincing.

Several names have been bestowed on the mysterious, hairy (and, reportedly, smelly) bipedal man-beast  said to roam the North American wilderness, but Bigfoot is the one that's stuck. Reports of  the creature date back to only the 1950s, and so far no teeth, hair, bones or any other trace of Bigfoot have been found. The best evidence for this beast remains a famous Patterson-Gimlin film shot in California in 1967— and even that looks like a guy in a cheap gorilla suit.

Perhaps best known as the Loch Ness Monster, Nessie is the aquatic beast said to inhabit Scotland's Loch Ness. Nessie was first reported in 1933, and since then many locals and tourists have claimed to see something in the cold, deep water. According to some believers, Nessie is a plesiosaur , a large marine reptile from the age of dinosaurs. Despite occasional reports, doctored photos, and scientific investigations (using everything from submarines to sonar beams), hard evidence of Nessie has yet to surface.

El Chupacabra, the "goat-sucker," was first seen in Puerto Rico in the mid-1990s. Descriptions vary, but it's said to be from 3 to 5 feet tall, have a row of spikes down its back, and possess alienlike eyes. It is also a vampire, supposedly sucking the blood out of its prey (mostly goats, sheep, and small animals). It is said to have either come from outer space, or be the product of secret government genetics experiments; its true origin, a 1995 sci-fi film, was recently revealed in the book "Tracking the Chupacabra."

This mythical beastie was literally birthed in the early 1700s. According to folklore, around that time a New Jersey-area woman gave birth to a cursed monster with a horse's head, bat's wings and cloven hoofs. Over the centuries this legend has been embellished by tall tales, hoaxes and occasional sightings of weird things in the woods, but according to Loren Coleman's book "Monsters of New Jersey" there's no hard evidence that it's more than a myth.

Champ is America's answer to Nessie, a mysterious lake monster said to live in Lake Champlain. Sometimes referred to as "America's Loch Ness Monster," Champ comes in many forms but is said to have several humps, be dozens of feet long, have dark skin and a head like a snake or a dog. The famous 1981 photo of Champ was later revealed to be a floating log, but Champ's legend is kept alive by occasional "sightings" and ambiguous photos and videos.

A relatively recent addition to the monster list, the Montauk Monster was a strange creature that washed up on a beach in Montauk, N.Y., in July 2008. A photo of the four-legged, clawed, nearly hairless animal circulated around the Web. Some thought it was a hoax; others believed it was a pig, or an unknown, possibly genetically modified animal. The Montauk Monster was finally identified as a decomposing raccoon.

While mermaids don't necessarily fit the public's image of monsters or beasts, the Feejee Mermaid was quite an exception. Showman P.T. Barnum introduced his infamous FeeJee Mermaid in the 1840s: not a beautiful, half-naked fish-woman but a hideous head and torso of a small monkey on the body and tail of a fish. It wasn't real, of course—close inspection of the specimen reveals the hand stitching that holds the two animals together —just one of several faked mermaid created to cash in on the public's curiosity.

Stories of sea monsters have been around for millennia; a1752 book titled "Natural History of Norway" described a monster named the Kraken , which was the size of a small island and "round, flat, and full of arms," and is often under the control of the sea gods. It became the subject of a famous catchphrase— “Release the Kraken!"—from the 2010 film "Clash of the Titans." Sightings of sea serpents are very rare today, and scientists now believe that many early reports were actually of giant squid, which can reach 43 feet long.

It seems like every country has its own lake monster. Ogopogo, "Canada's Loch Ness Monster," is the mysterious beast that many believe lurks in British Columbia's Lake Okanagan. Centuries ago, Native Americans believed that a water spirit lived in the lake, and live sacrifices were made to pacify the aquatic demon. (There's actually no real link between Native American myths and the monster, but this is often cited as its origin.) Ogopogo was in fact named after a popular dance hall song, and despite a lack of scientific evidence, people report occasional odd things in the lake to this day.

Vampires are hot. From "Dracula" to "Buffy the Vampire Slayer" to "Twilight," no mythical monster has captured the public's imagination in the same way. Fictional vampires are often tormented, sexy souls, and while blood-drinking human vampires don't exist—well, there are a few freaks out there who drink blood, but they don't survive on the stuff—there are many true vampiric animals, including leeches, female mosquitoes, ticks and, of course, the vampire bat.