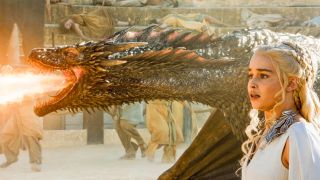 There's nearly no one who can match Daenerys Targaryen and her fire-breathing dragons.
(Image: © HBO)

Dragons have the ultimate built-in defense: They can breathe fire, smiting their enemies by turning them into charred husks.

But though historic and modern-day literature is rich with dragon lore (we're looking at you, "Game of Thrones"), there isn't any reputable physical evidence that these legendary creatures exist. That said, are there any living creatures that can breathe fire like the mythical dragon?

The short answer is no, but there are some astonishingly creative animals that can spew noxious fumes, toxins and goo from their bodies. And there are even crafty raptors that spread fire so they can smoke out tasty prey. [Top 10 Beasts and Dragons: How Reality Made Myth]

The main reason fire-breathing animals don't exist? Well, a flame could cause a nasty boo-boo.

"There are no real animals that are flame resistant or flame immune," Rachel Keeffe, a doctoral student studying reptiles and amphibians at the University of Florida, said in a statement. "There are animals that can resist super-high temperatures like ocean vents — certain worms can live in these really insane environments of heat, but that's not fire."

This fact might disappoint Daenerys Targaryen, the so-called Mother of Dragons from HBO's "Game of Thrones" — as well as her fire-breathing children Drogon, Viserion and Rhaegal — but there are still plenty of dragon-like animals out there. Take, for instance, the spitting cobra, a group that includes several species of cobra that spit blinding venom from their fangs when threatened. Afrotropical scorpions in the genus Parabuthus can squirt highly toxic venom at menacing interlopers.

And, while it isn't as singeing as Drogon's fiery blast, the gecko Strophurus can shoot a nasty-smelling goo out of its tail to frighten off predators.

"It's not toxic or anything. It's just kind of gross," said Keeffe, who co-authored and illustrated the forthcoming book "The Anthropology of Dragons: A Global Perspective."

Other beasties with defenses coming out of their derrières include skunks and bombardier beetles (Pheropsophus jessoensis), which fart a toxic chemical cocktail when threatened. These beetles' farts are so powerful that they can prompt toads that have eaten the beetles to puke out their last meal. That's exactly what the beetle wants; it may be covered with mucus from the toad's stomach, but sometimes these beetles can survive the ordeal.

However, when it comes to fighting with fire, Australian raptors take first prize. Three species of these predatory birds Down Under — black kites (Milvus migrans), whistling kites (Haliastur sphenurus) and brown falcons (Falco berigora) — are known to lurk by wildfires and then suddenly snatch up smoldering grasses or branches with their talons. The birds then use the fire to kindle new flames elsewhere, which, in turn, smoke out mammals and insect prey that they can eat.

As for actual fire-breathing animals, it appears those are confined to our imagination. Just note, this smoke-breathing elephant isn't some kind of dragon hybrid. Rather, it likely ate some pieces of wood charcoal from the forest floor, and then blew away the ash as it chomped down, Varun Goswami, a Wildlife Conservation Society elephant biologist in India, said in a statement.