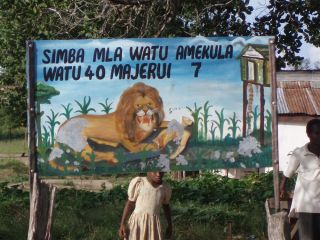 A sign commemorates 40 victims killed by a man-eating lion in the Rufiji District of Tanzania in 2005.
(Image: © Jonathan Packer)

The full moon is supposed to be the time when werewolves roam, but a new study finds that there's more to fear from large, nocturnal predators in the days after the moon is at its brightest.

African lions are more likely to attack and kill humans in the days right after the full moon, according to the study, published today (July 20) in the journal PloS ONE. The danger comes because lions struggle to catch prey — which see the predators coming — during the bright nights when the moon is full. In the 10 days after the full moon, however, the waning moon doesn't rise until after sunset. Anyone still outside when darkness falls is easy picking for the extra-hungry cats.

"The number of attacks on people in the evening hours skyrockets for the first five days after the full moon," study researcher Craig Packer of the University of Minnesota told LiveScience. "It was quite striking." [Top 10 Deadliest Animals]

By the light of the moon

For people in Tanzania, where Packer and his colleagues focused the research, the danger from lions is very real: More than 1,000 people in southern Tanzania were attacked by lions between 1988 and 2009. Over two-thirds of the attacks were fatal, with the lions eating the victims.

Earlier research had shown that lions have trouble hunting wildebeests and other prey when the moon is bright. Because lion attacks are a problem in Tanzania, Packer wanted to find out whether lions hunting humans are also affected by the lunar cycle. He and his colleagues analyzed data on about 500 lion attacks on humans in Tanzania since 1988, excluding those without a time of day listed or those that happened when people were hunting lions themselves. For each attack, the researchers noted the time of day and time of month.

They found a marked moonlight effect: Hourly attack rates were two to four times higher in the 10 days after the full moon compared with the 10 days before the full moon. The time of year also mattered. During a moonlit night in the wet season, when the night sky is more likely to be cloudy, lion attacks occurred three times as often than during similarly lit nights in the dry season, when clouds are rare and the nights brighter. [Read Moon Myths: The Truth About Lunar Effects on You]

Much of the effect was driven by attacks in the early evening hours, Packer said. In the days before the moon is full, it sets early, meaning the darkest time of night is in the early morning when few people are out and about. After the full moon, however, there is a gap of darkness between sunset and moonrise in the evening. People are more likely to be outside during the evening, Packer said, so they're more vulnerable to attack.

"If you go out and see the full moon on a beautiful evening, that's the safest night you're going to have," Packer said. "But the sight of the full moon is a good clue that in the coming days, there will be those periods of darkness."

The findings may extend beyond Tanzania, Packer said, explaining why humans so often fear the dark —and attribute mystical powers to the full moon.

"These nocturnal, stealthy predators rely on darkness to creep up and attack people," he said. "The moon would have had a very powerful effect throughout our evolution."