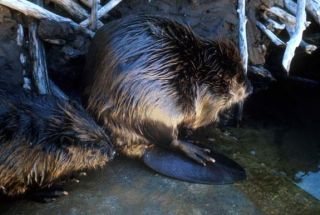 A rabies-ridden beaver that wreaked havoc in a Philadelphia park, biting three residents over the last week, likely contracted the virus after a scuffle with a rabid raccoon, park rangers say.

While beavers rarely transmit rabies in the area, residents should try to avoid the park and nearby areas of northeast Philadelphia where rabid raccoons might be hiding.

A single animal loose in the city's Pennypack Park first bit a married couple fishing on Wednesday (June 1), then a child on Thursday. The three victims were admitted to the hospital and treated for the infection.

After Thursday's attack, the animal was found and killed by a park ranger. It tested positive for rabies at the Pennsylvania Health Department lab, and also showed signs of blunt force trauma, consistent with the first attack, when the bitten husband claimed to have hit the beaver with a rock to chase it away.

"At this point, we do have reason to believe it was the same animal," Pennsylvania Game Commission spokesperson Jerry Feaser told LiveScience. "It's unusual that it was beavers, it was unusual that there were two incidences so closely together and it was truly bizarre it was in Philadelphia." [10 Deadly Diseases That Hopped Across Species]

The park officials are stumped by what they called a "truly bizarre" set of circumstances, as beavers aren't the usual source of rabies bites in the area. They are searching the park for any additional animals that might have contracted the disease from either the rabid raccoon or the beaver.

Rabies is a virus found in mammals and is spread through their bite. It attacks the brain and nervous system. Rabies is endemic in raccoons in most of the eastern United States, and when a rabid raccoon bites, it can transfer the disease to other animals, including humans, pets and other wildlife.

Other animals don't tend to spread the disease further, though, because in the United States, rabies is specifically adapted to living on raccoons, Pennsylvania Health Department epidemiologist Marshall Deasy told LiveScience.

Even when beavers do get the bug, there's not a big concern they'll transmit it. "Beavers have never been known to transmit rabies to anything, including other beavers," Deasy said. "But raccoons are extremely common; they bite people and pets, so it's an issue for vets and pet owners as well."

The attack in Philadelphia follows close on the heels of an earlier attack in late April on White Clay Creek (located in the suburbs of Philadelphia), where a fisher was bitten on the leg. The beaver was killed in the following struggle, and its carcass tested positive for rabies.

Those two cases are the only known transmission of rabies by a beaver during the last 12 years in the state, though rabies has been found in other mammals — mostly raccoons, skunks, cats, bats and foxes — between 350 and 500 times per year mostly in raccoons. Typically, rabies isn't confirmed until after the animal becomes aggressive and is killed by park rangers or the game commission. Many more thousands probably die from the disease in the wilderness, according to Deasy.Only a few cases a year are found within Philadelphia city limits.

No humans have died of rabies in Pennsylvania since 1984, when a 12-year-old boy was bitten by a bat and died in Lycoming County.