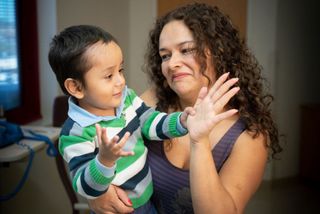 Two-year-old Gael, who was born with a severe immune disorder, now has a functioning immune system after treatment with an experimental gene therapy. Above, Gael with his mother Giannina Alva.
(Image: © St. Jude Children’s Research Hospital / Peter Barta)

Eight infants with a severe immune disorder, sometimes known as "bubble boy disease," appear to be cured of the disease thanks to an experimental gene therapy, according to a new study.

The disorder, officially called X-linked severe combined immunodeficiency (SCID-X1), causes babies to be born with little to no immune protection, making them prone to developing life-threatening infections. It's caused by a specific gene mutation.

The new gene therapy involves using an altered version of HIV — the virus that typically attacks the immune system and causes AIDS — to deliver a correct copy of the gene that causes the condition. (In this case, the virus had been genetically engineered so that it does not cause disease.) [11 Surprising Facts About the Immune System]

All of the children are now producing the immune cells needed to fend off the barrage of germs that humans encounter in their everyday lives, according to the study, published Wednesday (April 17) in the The New England Journal of Medicine.

"These patients are toddlers now, who are responding to vaccinations and have immune systems to make all [the] immune cells they need for protection from infections as they explore the world and live normal lives," lead study author Dr. Ewelina Mamcarz, a pediatric hematologist-oncologist at the St. Jude Department of Bone Marrow Transplantation and Cellular Therapy in Memphis, Tennessee, said in a statement.

About 16 months after their treatment, the patients are developing normally and have not experienced serious side effects from the therapy. But they will still need to be monitored for a longer period to determine if the treatment is long-lasting and doesn't cause side effects later in life, the researchers said.

SCID-X1 is caused by a mutation in a gene called IL2RG, which is critical for normal immune function, according to the National Institutes of Health. The condition is rare, likely affecting about 1 in 50,000 to 100,000 newborns.

The disease can be essentially cured by a bone-marrow transplant from a sibling that is a match in terms of certain immune system proteins. But fewer than 20% of patients with SCID-X1 have such a donor available, the authors said. Bone-marrow transplants from unrelated donors are typically less effective and come with greater risks.

The name "bubble boy disease" comes from the highly publicized case of David Vetter, who was born in 1971 with SCID-X1, and spent most of his life in a plastic bubble while awaiting a bone-marrow transplant, according to CBS. He died at age 12, after receiving his transplant.

Some previous attempts to treat SCID-X1 with gene therapy have had serious side effects. For example, a gene-therapy treatment in the early 2000s resulted in several patients developing leukemia.

In the new study, the researchers first collected patients' bone marrow. Then, they used the altered version of HIV to insert a working copy of the IL2RG gene into the bone marrow cells. These cells were then infused back into the patients. Before this infusion, the patients received a low dose of a chemotherapy drug to help make space in their marrow for the new cells to grow.

One concern with gene therapy is that, after inserting a gene into people's DNA, genes that are next to the insertion site may turn cancerous, as happened in prior cases where people developed leukemia. But the new treatment worked to prevent this from happening by including "insulator" genes that essentially block activation of the adjacent genes to prevent them from turning cancerous

The researchers say their technique might serve as a template for developing gene therapies for other blood disorders, such as sickle cell disease.