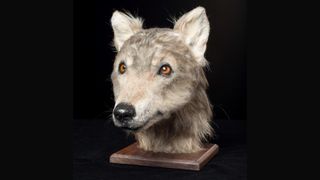 The re-created, three-dimensional face of a dog that lived 4,500 years ago in Scotland is so realistic, you almost want to reach out and pet its thick fur.

Besides melting the hearts of animal lovers, this dog — whose skull was found in an elaborate Neolithic burial at Cuween Hill in the Orkney islands, an archipelago off Scotland's northeastern coast — has surprised scientists. That's because this furball looks remarkably like a wolf, even though it was likely domesticated.

The dog was the size of a large collie and resembled, in some of its features, a European gray wolf, Alison Sheridan, principal archaeological research curator in the Department of Scottish History and Archaeology at National Museums Scotland, where the skull is stored, said in a statement.

Sheridan added that the skull and reconstruction could reveal details not only "about ceremonial practices and the symbolic significance of the dog in late Neolithic Orkney, but also about the appearance of domestic dogs in the third millennium B.C." [Gallery: Brand-New Baby Wolves]

Researchers have known about the Neolithic dog since 1901, when 24 dog skulls were discovered at the Cuween Hill burial. However, this is the first time one of the skulls has been "brought to life" with forensic reconstruction.

Previous research on the Cuween Hill site revealed that the dog remains were placed in the burial chamber there more than 500 years after the original tomb was constructed, indicating that these dogs were buried for ritualistic purposes, the archaeologists said.

To create an accurate 3D model of this particular dog, staff members put the skull in a CT scanner at Edinburgh University's Royal (Dick) School of Veterinary Studies. This scan, in turn, gave them enough data to print a 3D model, which forensic artist Amy Thornton used to shape Fido's head.

Just as she would a human facial re-creation, Thornton created the dog's likeness by building up muscle, skin and hair on top of the 3D-printed skull. "This brought its own set of challenges, as there is much less existing data relating to average tissue depths in canine skulls compared to humans," Thornton said in the statement. Even so, "the resulting model gives us a fascinating glimpse at this ancient animal," she said.

Dogs were clearly important in Neolithic Orkney. These ancient people likely kept them as trained pets and guard dogs, and may have even taught them how to herd sheep, said Steve Farrar, an interpretation manager at Historic Environment Scotland.

"Maybe dogs were their symbol or totem; perhaps, they thought of themselves as the 'dog people,'" Farrar said in the statement.