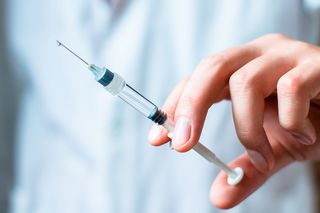 A new cancer "vaccine" that's injected directly into a single tumor can trigger the immune system to attack cancer cells throughout the body, a small new study suggests.

The researchers say that the experimental therapy essentially turns tumors into "cancer vaccine factories," where immune cells learn to recognize the cancer before seeking it out and destroying it in other parts of the body. "[We're] seeing tumors all throughout the body melting away" after injecting just one tumor, said lead study author Dr. Joshua Brody, director of the Lymphoma Immunotherapy Program at the Icahn School of Medicine at Mount Sinai in New York.

Still, the research, published today (April 8) in the journal Nature Medicine, is very preliminary. The therapy has only been tested in 11 patients with non-Hodgkin's lymphoma (a cancer of immune system cells), and not all of these patients responded to the treatment. But some patients did have remission for relatively long periods, and the results were promising enough that the therapy is now also being tested in patients with breast and head and neck cancers, the authors said. [7 Odd Things That Raise Your Risk of Cancer (and 1 That Doesn't)]

What's more, the "vaccine" appears to substantially boost the effectiveness of another type of immunotherapy called "checkpoint blockade" — the same therapy that former President Jimmy Carter received to treat his metastatic melanoma in 2015. ("Immunotherapy" refers to treatments that harness the immune system to fight cancer.)

To be clear, the new treatment is not technically a vaccine — a term used for substances that provide long-lasting immunity against disease. (Still, the term "cancer vaccine" can be used to refer to therapies that train the immune system to fight cancer, according to the American Cancer Society.)

Instead, the new treatment is a type of immunotherapy. It involves giving patients a series of injections with two types of immune stimulants.

The therapy has three steps. First, patients are given an injection that contains a small molecule that recruits immune cells, called dendritic cells, into the tumor. Dendritic cells act like generals in an army, telling the immune system "soldiers" — known as T cells — what to do, Brody said.

Next, patients are given a low dose of radiotherapy, which kills a few tumor cells so that they spill out "antigens," or proteins, that the immune system can learn to recognize, Brody said. Dendritic cells then take up these antigens and show them to the T cells.

Then, patients are given a second injection that contains a molecule that activates the dendritic cells.

"The dendritic cells are learning the lesson … and telling it to the T cells," which then can search the body for other cancer cells, Brody said.

In the new study, many of the 11 lymphoma patients saw a regression of their tumors that lasted for months to years. But several patients didn't benefit from the therapy.

The researchers were also interested to see how their therapy worked with checkpoint blockade drugs, which essentially take the "brakes" off T cells so they better attack cancer cells. While this therapy can work well for some types of cancer (indeed, President Carter had complete remission after his checkpoint blockade treatment), it doesn't work well for others, including non-Hodgkin's lymphoma.

When the researchers gave checkpoint blockade drugs to mice with non-Hodgkin's lymphoma, the treatment, not surprisingly, had no effect. But when they gave it in combination with their vaccine, about 75% of the mice went into long-term remission.

The type of therapy tested in the new study is known as "in situ vaccination," because it involves injections directly into tumor cells. It isn't the first experimental "in situ" cancer vaccine — in 2018, researchers reported promising results of another in situ vaccine in mice. But the new treatment is different because it focuses on dendritic cells rather than T cells.

The authors think "this could be … effective for many cancer types that are so far not benefiting much from cancer immunotherapy," Brody said.

Dr. Mark Mulligan, director of the NYU Langone Vaccine Center, who wasn't involved with the study, said the new findings appear promising. Figuring out how to harness checkpoint blockade drugs for more cancer types "is an important area of ongoing research," Mulligan told Live Science. The data presented in mice, and early data from the human trial, "appear promising" in terms of enhancing the effect of checkpoint blockade treatments, he said.

Still, Mulligan cautioned that the new study is the "earliest phase" of human testing, and that larger, more rigorous studies will now be needed to confirm the methods' safety and effectiveness.

Dr. Pallawi Torka, an assistant professor of oncology at Roswell Park Comprehensive Cancer Center in Buffalo, New York, who specializes in lymphoma, agreed the results are "preliminary yet promising."

New immunotherapy approaches for treating non-Hodgkin's lymphomas are "sorely needed," said Torka, who was not involved with the new research. The effectiveness of the study approach is "welcome news," especially given the dramatic improvement seen in the mouse study when the treatment was combined with checkpoint blockade, she told Live Science.

"The next set of experiments will need to focus on simplifying, combining and reducing the number of steps needed" so that the approach could be tested at a number of medical sites, rather than a few specialized cancer centers, Torka said.

Editor's note: This story was updated at 4:15 p.m. ET to include comments from Dr. Pallawi Torka.