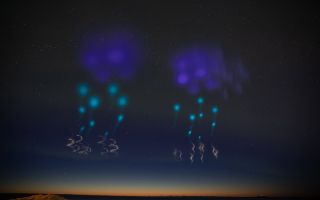 Strange and colorful light configurations after an aurora were part of a NASA rocket test.
(Image: © NASA Wallops)

Auroras are spectacular light shows, but a recent display in the skies over northern Norway was out of this world — sort of.

On Friday (April 5), clusters of purple, blue and yellow lights appeared in the country's night sky; as the ghostly shapes hovered, their eerie glow and unusual formation invited speculation about visiting alien spacecraft.

But extraterrestrials weren't behind the demonstration. It was NASA, launching a new rocket system from Norway to study the flow of winds in Earth's upper atmosphere, representatives of the agency's Wallops Flight Facility in Wallops, Virginia, tweeted that day. [Aurora Photos: Northern Lights Dazzle in Night-Sky Images]

Following the appearance of an aurora that night, NASA created another spectacular light show with chemical compounds, expelled by the Auroral Zone Upwelling Rocket Experiment (AZURE). This is the first of eight rocket missions to launch from Norwegian bases in Andøya and Svalbard. The missions will analyze the interactions of Earth's magnetic field lines and particles from space that bombard our planet, according to a NASA statement.

AZURE targeted the ionosphere, the electrically charged atmosphere layer that lies 46 to 621 miles (75 to 1,000 kilometers) above Earth.

During the launch, the rockets deployed chemical tracers — trimethylaluminum (TMA) and a barium-strontium mixture — that ionize in sunlight, enabling researchers to track the flow of neutral and charged particles. These tracers will help NASA measure the churning vertical winds that mix electrically charged particles and energy through the atmosphere, recording the winds' density and temperature, NASA said.

The tracers were released at altitudes of about 71 to 155 miles (114 to 249 km) above Earth's surface, and they posed no hazard to residents in the region, NASA wrote in an earlier statement.

As the two AZURE rockets launched — leaving at nearly the same time from Norway's Andøya Space Center — photographer Michael Theusner already had his camera trained on the sky, from a location about 112 miles (180 km) to the south of the launch. Theusner, writing in a description of the time-lapse on YouTube, said he "coincidentally" captured images of the rockets and of their subsequent light show.

When Theusner saw NASA's colorful lights, he didn't know what they were at first; he jokingly referred to them as "an alien attack," but an internet search soon revealed what had caused them, Theusner wrote on YouTube.

Using instruments on the rockets and on the ground, experts will track the movements of the colorful "alien" clouds in three dimensions. This analysis will provide important data on how particles travel through the ionosphere, so scientists can better understand the intricate ballet of energy that generates northern lights displays, NASA said.