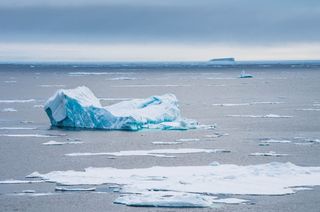 Sea ice born in the shallow seas off Russia rarely makes it out of its nursery before succumbing to melt.

New research finds that two decades ago, half of the sea ice formed near the Arctic coast of Russia went on a windblown journey through the Arctic Ocean and out via the Fram Strait between Greenland and Svalbard before melting. Today, only about 20 percent of the ice born near Russia makes that journey.

That's a big problem, said study leader Thomas Krumpen, an ocean ice physicist at the Alfred Wegener Institute Helmholtz Centre for Polar and Marine Research in Germany. Sea ice formed in shallow waters traps a lot of small particles, everything from sediments to algae to microplastic pollution to iron and other nutrients. When the ice melts in place rather than traveling, it affects the distribution of those substances.

"How will this change in transport affect the biogeochemical cycle in the Arctic Ocean as well as the ecosystem?" Krumpen said. "This is all poorly understood." [10 Things You Need to Know About Arctic Sea Ice]

Tracking sea ice is a challenge, because the Arctic is typically covered in clouds, shielded from the prying eyes of weather satellites. Krumpen and his colleagues developed a method to get around the problem, using satellites with microwave-based imaging that allowed them to see through the clouds. They can track where ice formed based on features like its texture and brightness.

Sea ice that forms in less than 100 feet (30 meters) of water in the Barents, Kara, Laptev and East Siberian seas typically gets blown northward by strong offshore winds, traveling toward the central Arctic Ocean, Krumpen told Live Science. Eventually, it gets caught up in a current called the Transpolar Drift, which circulates it around and southward out of the Fram Strait. This conveyer belt of ice has been speeding up in recent years, Krumpen said, because sea ice is thinning, and thinner ice drifts faster. Some scientists had speculated that this increase in speed might help make up for the decline in ice, because what ice there is might travel farther, faster, before melting.

The new research throws cold water on that notion. Using data from 1998 to 2017, the researchers found that the melt is happening too fast to make up for the increase in ice speed. Each decade, 17 percent less ice from shallow Russian waters reaches the Fram Strait, Krumpen and his colleagues reported today (April 2) in the journal Scientific Reports.

Caught in the drift

Using aerial ice surveys, the team also found that the ice that does reach the Fram Strait today largely originates in the open waters of the central Arctic Ocean, rather than the coast of Russia where the continental shelf extends out. It's 30 percent thinner than the ice in the Fram Strait in the early 2000s.

"It's the connection to the [continental] shelf seas that is lost," Krumpen said.

With that connection severed, sediments, nutrients, algae and other near-shore materials may stay near the shore rather than reaching the open ocean. The researchers are now striving to understand how that disruption in nutrient transport affects the Arctic ecosystem. An upcoming herculean effort should help: In September, international researchers will launch an expedition to deliberately freeze an icebreaker into the ice of the Transpolar Drift. Scientists on the mission, called MOSAiC, will take biological and chemical samples for an entire year, Krumpen said.

"We need to better understand the life cycle of these biogeochemical components," he said.