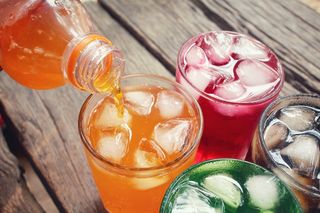 In the study, published yesterday (March 21) in the journal Science, researchers found that consuming the equivalent of 12 ounces of a beverage sweetened with high-fructose corn syrup accelerated tumor growth in mice that were predisposed to colon cancer.

Still, because the study was done in mice, more research is needed to see if the findings apply to humans. But "our findings in animal models suggest that chronic consumption of sugary drinks can shorten the time it takes [colon] cancer to develop," study co-senior author Dr. Jihye Yun, an assistant professor of molecular and human genetics at Baylor College of Medicine in Houston, said in a statement. Yun conducted the work as a postdoctoral fellow at Weill Cornell Medicine in New York City.

The researchers noted that there's been a rise in colorectal cancer rates among young people in recent decades — during the same time that consumption of sugar-sweetened beverages has increased. If the new results prove true for humans as well, the findings might help explain this link. [7 Odd Things That Raise Your Risk of Cancer (and 1 That Doesn't)]

Previous studies in people have linked consumption of sugary drinks with obesity, and obesity in turn is linked with an increased risk of developing colon cancer. But whether sugar itself could promote tumor growth was unclear.

To examine this question, the researchers turned to a mouse model for colon cancer. In these mice, a gene called APC is deleted, which predisposes them to developing polyps, the early stages of colon cancer. This model is similar to what happens in humans — more than 90 percent of people with colorectal cancer also have mutations in the APC gene, the authors said.

Lead study author Dr. Marcus Goncalves, an assistant professor of medicine at Weill Cornell Medicine, noted in the statement that the study didn't "show that giving high-fructose syrup causes new tumors, because these mice develop tumors even on normal diets free of added sugar … But when you give them this additional sugar, the tumors grow much bigger."

And the mice didn't have to consume large amounts of high-fructose corn syrup to develop larger tumors — this effect was seen when the mice consumed the equivalent of one can of soda (12 ounces) a day.

The researchers also found that the mouse tumors readily took in both glucose and fructose. Within the tumors, an enzyme known as KHK (ketohexokinase) changed fructose into a compound called fructose-1-phosphate, which promotes the production of fats necessary for tumor growth; and also makes it easier for the tumors to use glucose for energy.

The findings suggest that drugs that target KHK in tumor cells may reverse the tumor-enhancing effects of high-fructose corn syrup, the authors said.

But what about sweeteners besides high-fructose corn syrup? Preliminary experiments suggest that added table sugar has the same effect in these mice, the authors said.

Dr. Patrick Boland, an assistant professor of oncology and gastrointestinal oncologist at Roswell Park Comprehensive Cancer Center in Buffalo, New York, who was not involved with the study, noted that previous research has found a link between consumption of "high glycemic" foods and sugar-sweetened beverages and higher rates of colon cancer recurrence and death. (High glycemic foods, including high-fructose corn syrup, release sugar quickly into the bloodstream.)

"This study provides some potential explanation as to why large amounts of high-fructose corn syrup may not be good for our health in general and specifically as it relates to colon cancer," Boland told Live Science. "We already have data suggesting individuals with colon cancer or those at risk should probably limit the number of sugary drinks they have as much as possible," and the new study supports this, he said.

Still, the findings aren't definitive. "I don't think we have hard proof to say that all sugar should be avoided or that [high-fructose corn syrup] should never be consumed," Boland said. "Many things we see in mice aren't seen in humans."

Additional research looking at the effect of sugary drinks on colon cancer in people would be helpful, he said.