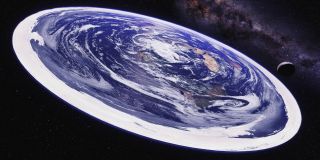 Organizers of an annual conference that brings together people who believe that the Earth is flat are planning a cruise to the purported edge of the planet. They're looking for the ice wall that holds back the oceans.

The journey will take place in 2020, the Flat Earth International Conference (FEIC) recently announced on its website. The goal? To test so-called flat-Earthers' assertion that Earth is a flattened disk surrounded at its edge by a towering wall of ice.

Details about the event, including the dates, are forthcoming, according to the FEIC, which calls the cruise "the biggest, boldest adventure yet." However, it's worth noting that nautical maps and navigation technologies such as global positioning systems (GPS) work as they do because the Earth is … a globe. [7 Ways to Prove the Earth Is Round]

Believers in a flat Earth argue that images showing a curved horizon are fake and that photos of a round Earth from space are part of a vast conspiracy perpetrated by NASA and other space agencies to hide Earth's flatness. These and other flat-Earth assertions appear on the website of the Flat Earth Society (FES), allegedly the world's oldest official flat Earth organization, dating to the early 1800s.

However, the ancient Greeks demonstrated that Earth was a sphere more than 2,000 years ago, and the gravity that keeps everything on the planet from flying off into space could exist only on a spherical world.

But in diagrams shared on the FES website, the planet appears as a pancake-like disk with the North Pole smack in the center and an edge "surrounded on all sides by an ice wall that holds the oceans back." This ice wall — thought by some flat-Earthers to be Antarctica — is the destination of the promised FEIC cruise.

There's just one catch: Navigational charts and systems that guide cruise ships and other vessels around Earth's oceans are all based on the principle of a round Earth, Henk Keijer, a former cruise ship captain with 23 years of experience, told The Guardian.

GPS relies on a network of dozens of satellites orbiting thousands of miles above Earth; signals from the satellites beam down to the receiver inside of a GPS device, and at least three satellites are required to pinpoint a precise position because of Earth's curvature, Keijer explained.

"Had the Earth been flat, a total of three satellites would have been enough to provide this information to everyone on Earth," Keijer said. "But it is not enough, because the Earth is round."

Whether or not the FEIC cruise will rely on GPS or deploy an entirely new flat-Earth-based navigation system for finding the end of the world, remains to be seen.