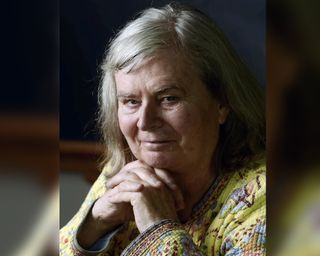 Mathematician Karen Uhlenbeck is the first woman to be awarded the prestigious Abel Prize for her groundbreaking work in geometric analysis and gauge theory.
(Image: © Marsha Miller)

Uhlenbeck, an emeritus professor at the University of Texas at Austin and currently a visiting scholar at Princeton University, won for her "pioneering achievements in geometric partial differential equations, gauge theory and integrable systems, and for the fundamental impact of her work on analysis, geometry and mathematical physics," according to a statement from the academy, which awards the prize. [Female Firsts: 7 Women Who Broke Barriers in Science and Tech]

"I can't think of anyone who deserves it more," said Penny Smith, a mathematician at Lehigh University in Pennsylvania, who has worked with Uhlenbeck and says she has become her best friend. "She really is not just brilliant but creatively brilliant, amazingly creatively brilliant."

Uhlenbeck is considered one of the pioneers of the field of geometric analysis, which is the study of shapes using what are known as partial differential equations. (These equations include the derivatives, or rates of change, of multiple different variables like x,y and z.)

Curved surfaces (imagine a doughnut or a pretzel), or even difficult-to-visualize, higher-dimensional surfaces, are generally called "manifolds," Smith said. The universe itself is a four-dimensional manifold defined by a set of partial differential equations, she added.

Uhlenbeck, along with a couple of other mathematicians in the 1970s, developed a set of tools and methods for solving partial differential equations that describe many manifold surfaces.

In her early work, Uhlenbeck, along with mathematician Jonathan Sacks, focused on understanding "minimal surfaces." An everyday example of a minimal surface is the outer surface of a soap bubble, which normally settles on a spherical shape because that uses the least amount of energy in terms of surface tension.

But then, say you drop a cube made of wire into a soap solution and pull it back out. The soap still seeks the lowest-energy shape, but this time, it must do so while also somehow clinging to the wire — so, it will form a bunch of different planes meeting at 120-degree angles.

Defining the shape of this soap bubble becomes more and more complicated the more dimensions you add, such as a two-dimensional surface sitting in a six-dimensional manifold. Uhlenbeck figured out the shapes that soap films can take in higher-dimensional curved spaces.

Here's how it goes. Sometimes when trying to study surfaces, mathematicians run into trouble. The trouble has a name: a singularity.

Singularities are points in the calculations that are so "horrible" you can't do calculus, Smith said. Imagine an upside-down, pointy hill; one side goes up and has a positive slope, and the other side goes down and has a negative slope. But there's a point in the middle that neither goes up nor goes down, and it wants to have both slopes, Smith said. That's a problematic point … a singularity.

It turned out that gauge theories, or a set of quantum physics equations that define how subatomic particles such as quarks should behave, had some of these singularities.

Uhlenbeck showed that if you don't have too much energy and you're operating in a four-dimensional space, you can find a new set of coordinates where the singularity disappears, Smith said. "She gave a beautiful proof of that." This new set of coordinates satisfy a partial diffential equation that makes the guage theory equations more tractable, she said.

Other mathematicians extended this idea to other dimensions. "We all used Uhlenbeck's ideas in an essential way," Smith said.

But her reach extends beyond her mathematical prowess; she has also been an important mentor to women in science and math. For example, she co-founded a program called “Women and Mathematics at Princeton, according to a statement from the university.

"I am aware of the fact that I am a role model for young women in mathematics," Uhlenbeck said in the statement. "It's hard to be a role model, however, because what you really need to do is show students how imperfect people can be and still succeed … I may be a wonderful mathematician and famous because of it, but I'm also very human."