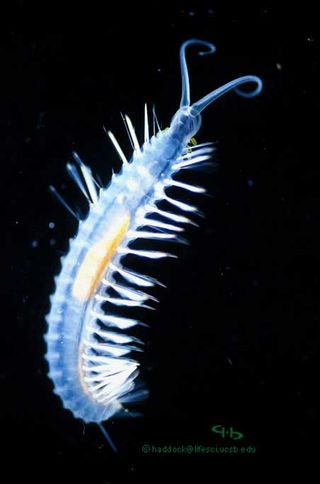 One of a new species of "green bombers" (Swima bombiviridis) collected from Monterey Bay. The animals release bioluminescent sacs that may serve to distract predators. Several of these sacs are visible near the animal’s long coiled head palps.
(Image: © © 2001 S.H.D. Haddock)

A "dracula" fish with canine-like fangs, a worm that launches glow-in-the-dark bombs and a psychedelic frogfish are among the Top 10 new species discovered in 2009, scientists just announced.

The International Institute for Species Exploration at Arizona State University and an international committee of taxonomists selected the species from around the world for the annual New Species list.

"Committee members had complete freedom in making their choices and developing their own criteria, from unique attributes or surprising facts about the species to peculiar names," said Quentin Wheeler, director of the International Institute for Species Exploration at Arizona State University and an entomologist in the School of Life Sciences.

Here are the Top 10 winners:

"Charting the species of the world and their unique attributes are essential parts of understanding the history of life," Wheeler said. "It is in our own self-interest as we face the challenges of living on a rapidly changing planet."

Wheeler advocates a new generation of cyber-tools and Web resources that could vastly accelerate the rate at which humans discover and describe species.