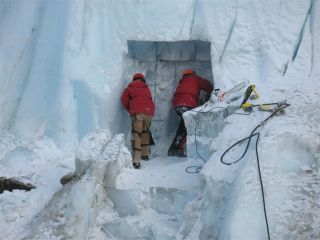 Antarctica is just about as far away from Louisiana State University (LSU)’s hot and humid home state as you can get. But despite the extreme temperatures and frozen landscape, that's just where Ph.D.  student and Louisiana native Shawn Doyle, along with his adviser Brent Christner, spend a great deal of time doing fieldwork.

"Shawn's project focuses on providing evidence that metabolically active microbes exist in ice," said Christner, assistant professor of biology at LSU. "So traveling to Antarctica is really just part of the job description."

Doyle started working in Christner's lab as an undergraduate student at the university. It was through this research experience that he was able to travel to Antarctica for the first time.

"I never thought I'd end up traveling to Antarctica in my lifetime," Doyle said. "After I took a job in Dr. Christner's research lab during my senior year, I soon found myself standing on the coldest, windiest and highest continent on the plant. I got to visit the frozen continent for the first time back in 2007, and I just returned recently from my second trip this last December [2009]."

The microbes Doyle and Christner study are significant because scientists previously believed that no life could inhabit the world's glaciers and ice sheets. Researchers assumed that any microorganisms in these permanently frozen environments would be dead or metabolically dormant, and thus have no significant impact on their environment.

"Microbes live beneath the ice sheets of Antarctica, for example, in sub-glacial lakes with no access to sunlight," Christner said. "If we are successful in showing that these microscopic creatures have the potential to metabolize and persist within glaciers, this would support notions of microbial life existing on other icy planets or moons in the solar system."

Of course, just getting to Antarctica is an adventure in itself. After an overnight flight from Los Angeles, they stop in Christchurch, New Zealand, to acquire their Extreme Cold Weather, or ECW, gear from the clothing distribution center run by NSF's U.S. Antarctic Program. Weather permitting, the following morning the team boards an Air Force C-17 for a five hour flight due south to the ice runway at NSF's McMurdo station.

All further transport from McMurdo to Christner and Doyle's field camp in Taylor Valley is by helicopter. These services are provided by Petroleum Helicopters Inc., or PHI, which is coincidentally also located in Louisiana.

Once the researchers have arrived and settled in, it's time to get to work. In order to access the glacial ice they wish to sample, Christner, Doyle and their colleagues use chainsaws, demolition hammers and ice picks to literally carve ice caves into the sides of glaciers.

"All participants are trained to use the equipment safely, so it's not as dangerous as it sounds, plus it's the best way to collect very large samples for analysis," Christner said.  "I'll admit, chainsaws aren't exactly typical tools used in microbiological fieldwork."

While the research is compelling and the fieldwork exciting, living conditions at base camp aren't quite up to hotel standards.

"We each have our own one-person mountaineering tent to sleep in," Doyle said. "We're supplied with heavy, cold-weather sleeping bags, as well as a pile liner and camping mattress to sleep on. It's not luxurious or anything, but it does keep you warm."

But how do the scientists stay comfortable when they're working?

"It's all about being properly equipped," Christner said. "NSF provides us with excellent extreme-weather gear and equipment. Conducting research in this environment would be extremely difficult without this high level of support."

"The worst part is the heavy steel-toed Baffin boots we have to wear to the tunnel-site," Doyle said. "I'd imagine, since I grew up in Louisiana, it's a little more difficult for me; but some of the other guys from Montana who are used to the cold weather are probably a little more comfortable with all the heavy equipment we have to wear."

Aside from the cold, one of the most challenging issues Doyle and Christner face while acclimating to life on the continent is the constant presence of sunlight.

"In the field, we start our days around 8 a.m., just like any workplace. This can take a little getting used to at first, because remember, during the austral summer in Antarctica, the sun never sets! It's daytime, all the time," Doyle said.

A surprising revelation about life in the Antarctic field camps is that, well, the food isn't half bad.

"This is the most popular question I get asked about Antarctica field-camp life," Doyle said. "Surprisingly, we eat very well in the field. We have lots of frozen meats, vegetables and canned goods from which we can cook just about whatever we want.  Some members of the team are actually very good cooks. We've cooked meals ranging from vegetable stir fry to pork roasts with mashed potatoes. Nevertheless, there are some things we can't get in the field, like fresh dairy products and produce."

No matter what the conditions, doing research in Antarctica is the opportunity of a lifetime for these two biologists.

"This is the fantastic part about science," Doyle said. "It's not all lab coats and test tubes.  You have to go out in the field and explore, find samples to test your hypotheses and use the most amazing technology available to get to the bottom of these biological mysteries.  It's really an exciting field of study."

In fact, Doyle is so taken with this research that he developed an outreach program to expose high school students at his alma mater, Sulphur High School in Sulphur, La., to the opportunities a career in biological sciences can bring. He also created a blog, so that the students could follow his fieldwork in Antarctica.

"Reaching out to my old high school has been a very fulfilling experience," Doyle said. "I just think it's so important for kids to know that scientific careers bring great options, and the earlier they understand this, the better for their futures."

"It is incredibly rewarding to watch how students develop and are inspired by conducting research and field work," Christner said. "The pathway to becoming a scientist seems like a long road, but there is a huge payoff in the end. You get to travel to places most people only dream of and delve into questions that have never been asked. It involves long hours and dedication, but it sure beats working for a living!"