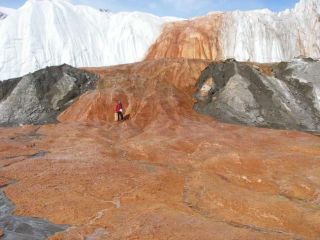 A living time capsule of sorts has been found buried under hundreds of feet of Antarctic ice — a colony of microbes that have been sealed off from the rest of the world for more than 1.5 million years.

The finding, detailed in the April 17 issue of the journal Science, could serve as a model for how life might survive on icy planets elsewhere in the galaxy.

The microbes, which live without light or oxygen, were detected in meltwater flowing out from Taylor Glacier, one of the outlet glaciers of the vast East Antarctic Ice Sheet in the otherwise ice-free McMurdo Dry Valleys.

The Dry Valleys are considered one of Earth's most extreme deserts, devoid of animals and complex plants.

Analyses revealed that the glacier water held microorganisms that use sulfur compounds to extract iron in the bedrock below the glacier (this iron also accounts for the rusty hue of the water).

"When I started running the chemical analysis on [the samples], there was no oxygen. That was when this got really interesting, it was a real 'eureka' moment," said researcher Jill Mikucki, who conducted the research, which was supported by the National Science Foundation, while a graduate student at Montana State University and a postdoctoral researcher at Harvard University. She currently works at Dartmouth College in New Hampshire.

The researchers can't drill down to the pool that is home to the microbes because the ice is too thick and too far back from the edge of the glacier, but they think the pool is less than 3 miles (5 kilometers) across and was formed about 1.5 million to 2 million years ago.

Genetic tests suggest that the microbes are similar to ones found in marine environments today, which the researchers think are a remnant of a larger population of microbes that once lived in a fjord or sea that was cut off when sea levels fell and left the pool behind. The pool was eventually capped off by the flowing glacier.

"It's a bit like finding a forest that nobody has seen for 1.5 million years," said study team member Ann Pearson of Harvard. "Intriguingly, the species living there are similar to contemporary organisms, and yet quite different — a result, no doubt, of having lived in such an inhospitable environment for so long."

The water the microbes dwell in averages a temperature of 14 degrees Fahrenheit (minus 10 degrees Celsius), but doesn't freeze because the water is three to four times saltier than the ocean.

This briny pond "is a unique sort of time capsule from a period in Earth's history," Mikucki said. "I don't know of another environment quite like this on Earth."

Learning more about this unique environment could shed light on how microorganisms might survive on icy planets in our solar system, such as below the Martian ice caps or in the ice-covered ocean of Jupiter's moon Europa.