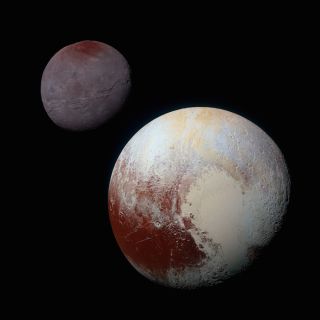 Pluto may have been downgraded to a dwarf planet, but its mysteries still loom large. When NASA's New Horizons reconnaissance probe flew past Pluto and its moon Charon in 2015, the resulting footage revealed a novel world of icy peaks, glacial planes and frozen volcanoes not seen anywhere else in the solar system.

Now, researchers are looking at that footage again for clues about one of the solar system's most enigmatic regions: the vast ring of icy debris known as the Kuiper Belt.

In a new study published today (Feb. 28) in the journal Science, a team of planetary scientists led by researchers at the Southwest Research Institute in Boulder, Colorado, pored over New Horizons maps of Pluto and Charon to count the scars left by billions of years of collisions with rogue Kuiper Belt objects (KBOs). These icy bodies orbit the Kuiper Belt at the edge of the solar system (and Pluto itself is the largest of them). [When Space Attacks: The 6 Craziest Meteor Impacts]

By studying impact craters, the researchers discovered that Pluto and Charon had been battered by far more large objects than small ones over the last 4 billion years. This suggests that the Kuiper Belt is primarily populated by big, ancient objects that date to close to the formation of the solar system.

"Craters give you a window into the past," lead study author Kelsi Singer, a senior research scientist at the Southwest Research Institute and member of the New Horizons team, told Live Science. "We can use the number of craters to say how old a surface is, which helps us learn more about the Kuiper Belt as a whole."

Generally, parts of a planet's surface speckled with lots of craters are thought to be relatively old, whereas regions without any craters are considered to be new developments, Singer said. On Pluto, for example, there is a bright sheet of nitrogen ice known as The Heart, named for its shape. Because there are no impact craters on this region, it is believed to be relatively young compared to the rest of Pluto's surface.

In contrast, past evidence suggested that some crater-rich regions of Pluto are about 4 billion years old, Singer said. By closely studying the sizes of the craters in those regions, the researchers can get a snapshot of the types of objects moving through the Kuiper Belt billions of years ago, not long after the solar system formed.

In the new study, the team examined nearly 3,000 impact craters from New Horizons' 2015 observations. Something stood out: While the craters came in a wide range of sizes, very few craters came from small objects measuring between 1 and 2 kilometers (0.6 and 1.2 miles) in diameter.

"This was surprising to us, because we based a lot of our expectations about the Kuiper Belt on what we knew about the asteroid belt [between Mars and Jupiter]," Singer said. "It turns out there are a lot fewer small objects in the Kuiper Belt than we thought. That tells us something about the area's collisional history."

How? Well, small celestial objects are created by collisions between larger objects, Singer said. A low number of small objects in the Kuiper Belt likely means that fewer collisions have occurred there over time — and that means that many of the objects orbiting in that region are more likely to be "primordial" relics of the early solar system, Singer said.

"When New Horizons got to Ultima Thule in January, it looked like a fairly primordial body," Singer said. "There's maybe one big impact crater on it, and it doesn't look like it was ever broken apart and reformed."

If the Kuiper Belt is indeed full of ancient objects like these, studying the region's mysteries could shed light on the solar system's earliest days, Singer said. For its part, New Horizons will continue plunging into the frontier of icy debris at the edge of our solar system. What the probe will find next is anyone's guess.