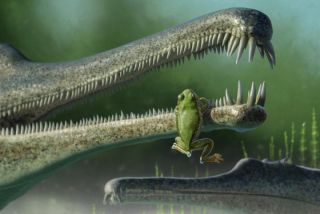 An artist's interpretation of the newly discovered Chinle frog that's dangling from the jaw of a phytosaur, a heavily armoured semi-aquatic reptile.
(Image: © Andrey Atuchin/Virginia Tech)

It's possible that during the Triassic period, the crocodile-like phytosaur snapped at a frog-like creature, but missed. It's a good thing it did, because 216 million years later, paleontologists have found the fossils of these tiny creatures, the oldest known frog relative from North America, a new study finds.

This frog — nicknamed the Chinle frog because it was found in the Chinle Formation of northern Arizona — is a big finding, but the creature itself was small, just over 0.5 inches (1.3 centimeters) long.

"The Chinle frog could fit on the end of your finger," study lead researcher Michelle Stocker, an assistant professor of geosciences at Virginia Tech, said in a statement. [40 Freaky Frog Photos]

The frog fossils were found next to the fossils of the crocodile-like phytosaur and those of early dinosaurs, the researchers said. The scientists, however, didn't find entire frog skeletons, but rather a few fragmented ilium, or hip bones, from several of these ancient frogs during an excavation in May 2018. But they hope to find more of the frogs' fossils soon, which is why they haven't given the creature a scientific name yet.

They are still sifting through the dirt and rock excavated at the site, where they expect to find more skull and skeletal material from the frogs — findings they say will be more informative about the identity of this kind of creature, Stocker said.

The team noted that while Chinle specimens are distant relatives of frogs, they are not the direct ancestor of modern frogs. But they're still salientians — a group that includes living frogs and their closely related, extinct relatives.

In fact, the Chinle frog is the oldest known salientian from near the equator, the researchers noted.

That's because during the Triassic period, when these frog-like animals lived, Arizona wasn't where it is today. Instead, the Grand Canyon state was once part of the supercontinent Pangaea and was located about 10 degrees north of the equator, the researchers said.

An analysis of the frogs' hip bones shows that the species shares more features with modern frogs and Prosalirus, an early Jurassic frog discovered in the present-day Navajo Nation, than it does with Triadobatrachus, an early Triassic frog found in modern-day Madagascar.

"These are the oldest frogs from near the equator," Stocker said. "The oldest frogs overall are roughly 250 million years old from Madagascar and Poland, but those specimens are from higher latitudes [than the Chinle frog] and not equatorial."

The discovery of the Chinle frog may also be a sign of things to come. "Now [that] we know that tiny frogs were present approximately 215 million years ago from North America, we may be able to find other members of the modern vertebrate communities in the Triassic period," study co-researcher Sterling Nesbitt, an assistant professor of geosciences at Virginia Tech, said in the statement.

The study was published online today (Feb. 27) in the journal Biology Letters.