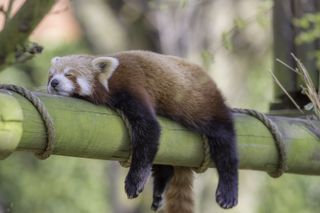 This red panda is getting in its zzz's.
(Image: © Shutterstock)

Some do it hanging upside down. Some do it for a few hours at a time. Some do it buried under a blanket of mud.

Regardless of their preferred mode, bats, elephants, frogs, honeybees, humans and more have something in common: They all sleep.

In fact, scientists have yet to find a truly sleepless creature. But is sleep really necessary for survival? [Why Do We Sleep?]

The dangers of sleeplessness

Most humans will acknowledge that sleep is absolutely necessary.

People often struggle to function after even just one sleepless night. Poor sleep over the long term has been linked to a host of negative health effects, from heart disease and stroke to weight gain and diabetes. These connections, and the fact that all animals seem to slumber, suggest that sleep must play an essential function for animals. But what is that function? Does sleep allow the brain to repair damage and process information? Is it necessary for energy regulation in the body? Scientists and thinkers as far back as the Greek philosopher Aristotle have offered explanations for why we sleep, and yet, the exact purpose of sleep remains an open question.

In the 1890s, Marie de Manacéïne, one of the first female physicians in Russia, was troubled by the mystery of sleep.

"We all love life, and we all wish to live as long as possible, but in spite of this, we sacrifice one-third, sometimes even half of our life in sleeping," Manacéïne once wrote. In her quest to figure out what exactly sleep is, she conducted the first sleep-deprivation experiment in animals.

Using an approach that now seems quite cruel, the physician kept puppies continuously awake, finding that they died after a few days of sleep deprivation. Over subsequent decades, further sleep-deprivation experiments using other animals, like rodents and cockroaches, found similarly fatal results. However, the underlying cause of death in these cases, and how it relates to sleep, is still unknown.

While total sleeplessness seems dangerous, some creatures can get by with remarkably short bouts of sleep. They could be the key to understanding sleep's function, scientists have said.

A study published in February in the journal Science Advances monitored the sleeping habits of fruit flies.

Gilestro and his colleagues observed that 6 percent of female flies slept for less than 72 minutes each day, compared to the average of 300 minutes that the other females slept. One female even slept as little as 4 minutes a day on average. In a further experiment, the researchers deprived the flies of 96 percent of their sleep time. But these flies didn't die prematurely, like the Russian puppies did; these virtually sleepless flies instead lived just as long as a control group that was left to sleep normally.

Now, Gilestro and a few other researchers are starting to wonder if sleep is less necessary than people have thought.

"Some animals seem to survive on far less sleep than previously expected based on restorative theories for the function of sleep," Niels Rattenborg, who studies sleep in birds at the Max Planck Institute for Ornithology in Germany, told Live Science.

In a 2016 study, Rattenborg and his colleagues outfitted great frigatebirds (Fregata minor) in the Galápagos Islands with a small device to measure electrical activity in the brain. The monitors showed that the birds sometimes slept in one hemisphere of their brains at a time while they were soaring over the ocean. They sometimes even slept in both hemispheres simultaneously while in flight.

Sleeping while flying could be common among other bird species — such as common swifts (Apus apus), which can fly for 10 months without landing — though scientists have no direct evidence for this.

But perhaps more surprisingly, the study found that the frigatebirds, while flying, slept on average just 42 minutes per day, even though they typically got more than 12 hours of shut-eye on land.

Does Rattenborg think we'll ever find an animal that doesn't sleep at all?

"Anything is possible," he said. "However, an emerging pattern among the studies of short-sleeping animals is that none are completely sleepless. This preservation of a little sleep suggests that there is a minimum amount of sleep that is essential, even in these remarkable short sleepers."