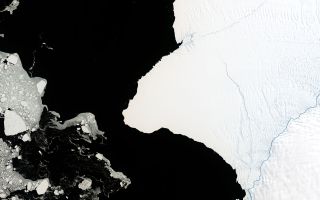 Cracks are snaking in two directions across the Brunt Ice Shelf on the northern coast of Antarctica. The fracturing ice shelf could soon release an iceberg about twice the size of New York City.

The future of the rest of the ice shelf isn't looking too promising, either.

On Feb. 20, NASA Earth Observatory shared images of the ice shelf, comparing a satellite view from Jan. 23 to another image taken on Jan. 30, 1986. In the 2019 photo, a long fracture can be seen meandering south to north and spanning most of the shelf.

Another rift — dubbed "the Halloween crack" after its appearance in October 2016 — extends from west to east along the top of the image. But the northward-traveling crack is more worrisome, as it is currently lengthening by nearly 3 miles (4 kilometers) each year, Earth Observatory said. [In Photos: Huge Icebergs Break Off Antarctica]

That fracture has just a few miles to go before it reaches the Halloween crack. Once that happens, the shelf will release an iceberg measuring approximately 660 square miles (1,700 square km), more than twice the area of New York City's five boroughs and the biggest iceberg to separate from Brunt Ice Shelf since 1915, according to Earth Observatory.

Depending on where the cracks merge, the stability of the entire shelf could be jeopardized, Joe MacGregor, a glaciologist at NASA's Goddard Space Flight Center, told Earth Observatory.

Rising global temperatures have accelerated ice loss in Antarctica, with the frozen continent spawning many sizable icebergs in recent years. One towering berg that separated from the Larsen C Ice Shelf in July 2017 was estimated to be about the size of Delaware, and an even bigger iceberg broke off Pine Island Glacier in September of the same year.

Then, in October 2018, Pine Island Glacier birthed another massive iceberg, this one about five times as big as Manhattan. While the Pine Island Glacier is known for regularly dumping vast quantities of ice into the sea, these events are now occurring more frequently, raising concerns about how the calvings could affect sea-level rise in a warming world, Live Science previously reported.