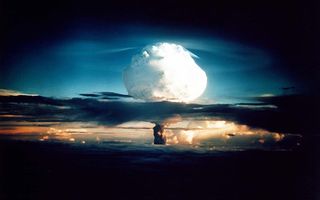 When President Donald Trump withdrew the U.S. from a long-standing nuclear weapons treaty with Russia on Feb. 1, his actions set the stage for what many fear could be a new arms race between the global superpowers.

Trump's decision was announced less than two weeks after scientists and policy experts with the Bulletin of the Atomic Scientists (BAS) presented the 2019 position for the Doomsday Clock — a hypothetical clock whose time symbolizes how close the Earth is to destruction from nuclear war and other global threats.

On Jan. 24, BAS representatives declared that the clock's hands would continue to stand at 2 minutes to midnight, the closest to absolute annihilation since the peak of the Cold War in 1953. Their dire warning came on the heels of the Trump administration's statement of intent in October to withdraw the U.S. from the Intermediate-Range Nuclear Forces Treaty (INF), which was established in 1987 to restrict nuclear arsenals, according to a BAS statement.

Now that the U.S. has officially abandoned one of the last remaining nuclear treaties with Russia, does that nudge the clock closer to doomsday? [The Top 10 Ways to Destroy Planet Earth]

When President Ronald Reagan and Russian President Mikhail S. Gorbachev signed the INF treaty, they agreed that their respective countries would cease building nuclear weapons and would destroy all ground-based cruise or ballistic missiles with ranges of between 311 and 3,420 miles (500 and 5,500 kilometers) within three years of the treaty signing.

However, the Trump administration elected to withdraw from the agreement in October of last year, accusing Russia of violating the terms of the INF in 2014. At that time, Russia had deployed a land-based cruise missile known as the SSC-8, which was capable of reaching countries in Europe, The New York Times reported.

That October 2018 decision was alarming enough to prompt BAS officials to keep the hands on the Doomsday Clock at 2 minutes to midnight, Rachel Bronson, BAS president and CEO, told Live Science.

Prior to the Trump announcement, many experts felt that the risk of nuclear war had decreased somewhat since 2017, when tensions between the U.S. and North Korea were surging. But the call to dissolve the INF treaty was one of several factors that informed BAS's assessment — that the threat of imminent nuclear war isn't going away anytime soon.

"The arms-control architecture that had been built up over the last three-plus decades is just being dismantled," Bronson said.

And even if Russia did break the INF treaty in 2014, the withdrawal of the U.S. from the treaty quashed any chance of holding Russia accountable and rallying global condemnation of the country's actions, Bronson said.

"There's value in having the treaty, because then the U.S. can hammer at Russia for being in violation of it," Bronson said. "Without it, there's nothing keeping them bound even to a facade of trying to reduce reliance to nuclear weapons." [Apocalypse Now: The Gear You Need to Survive Doomsday]

On Feb. 2, Russia announced that it, too, would abandon the INF treaty, Time reported. This raises questions about the uncertain future of another U.S.-Russia agreement, the 1991 START treaty to limit nuclear weapons, which is set to expire in 2020, according to The Washington Post.

What happens next? The world certainly seems to be in a less stable place than it was a year ago, with Russia and the U.S. walking away from their former commitments to limit nuclear weapons and directing resources into new weapons development. In addition, the Trump administration has shown little interest in pursuing new agreements or rekindling negotiations, Bronson said.

It's still too early to say for sure if the collapse of the INF treaty will inevitably send the hands of the Doomsday Clock swinging closer to midnight than ever before. The clock was created in 1947 specifically in response to the development of nuclear weapons, which introduced threats to the planet that were unprecedented in the history of warfare, Alan Robock, associate editor of the journal Reviews of Geophysics and a professor in the Department of Environmental Sciences at Rutgers University in New Jersey, told Live Science in an email.

Even localized nuclear weapons can take their toll on more than the immediate vicinity by triggering "nuclear winter" — generating dense smoke clouds that cool the planet and prevent crops from growing, causing widespread famine, he added. [The Top 10 Largest Explosions Ever]

But the clock — as close as it now stands to a potential Armageddon — should also serve as a reminder that there is still time to reverse this new and dangerous course, Bronson said.

"What the Doomsday Clock does is it allows all of us to jump into this conversation that can often seem so remote and so distant," she said.

"These are complicated issues. It can often feel like it's beyond our ability to engage in the subject of arms control as well as the technical aspects of it. The Doomsday Clock allows a broader conversation — and these issues are too important to just leave to the experts," Bronson said.