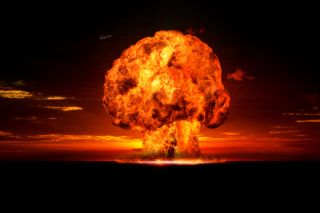 Earth's precarious future is measured in minutes on the hypothetical Doomsday Clock, and its hands are currently creeping perilously close to midnight.
(Image: © Shutterstock)

The "Doomsday Clock," a hypothetical timepiece that measures humanity's proximity to destruction by our own actions, hovers perilously close to midnight, the time that denotes global Armageddon.

Today (Jan. 25), the clock has crept even closer to the zero hour. This morning, the Bulletin of the Atomic Scientists (BAS) — an organization of science and policy experts who assess human scientific advancement and risk — revealed the clock's new "time," with the hands now standing at 2 minutes to midnight.

The time has only ever been this close to midnight in 1953, following hydrogen bomb tests by both the U.S. and the U.S.S.R., ushering in the era of the first nuclear arms race. In 2018, it reflects the breakdown of global efforts to reduce reliance on and risk of nuclear weapons; increased posturing and threats regarding the use of nuclear weapons; and an insufficient response worldwide to curb the impacts of climate change. [Apocalypse Now: The Gear You Need to Survive Doomsday]

It is not any one of those factors, but a combination of all of them — and the weakening of public faith in knowledgeable expert voices — that prompted the change to the clock, Lawrence Krauss, chair of the BAS Board of Sponsors and director of the Origins Project at Arizona State University, told reporters.

"The danger of nuclear conflagration is not the only reason the clock has been moved forward, as my colleagues have described. This danger looms at a time when there’s been a loss of trust in political institutions, in the media, in science, and in facts themselves, all of which exacerbate the difficulty in dealing with the real problems the world faces, and which threaten to undermine the ability of governments to effectively deal with these problems," Krauss said.

The new time was set by the BAS' Science and Security Board, a group of scientists and other experts in nuclear technology and climate science. They meet twice annually to confer about events of global importance and how they might affect the clock's status. They consult with colleagues and with the BAS' Board of Sponsors, which includes 15 Nobel laureates, when making decisions about changes to the clock.

Escalations in the nuclear realm — North Korea's missile tests, the upgrading of nuclear arsenals in South Asia and in the Middle East, and the absence of nuclear arms control negotiations between the U.S. and Russia — were a significant cause for alarm throughout 2017, increasing the risk of nuclear war and undermining global stability, BAS representatives announced at a press event.

Greenhouse gas emissions were also on the rise in 2017. The year saw notable impacts from a changing climate, with devastating storms, more heatwaves, and wildfires in the U.S. and Australia that were made worse by extreme drought, Sivan Kartha, a senior scientist at Stockholm Environmental Institute, told reporters.

Sea-ice cover in the Arctic in 2017 was smaller than ever at the peak of the winter season, leaving more of Earth's surface exposed to sunlight that would then be absorbed rather than reflected, warming the planet even further, Kartha explained.

With climate denialists installed in top administrative positions in the U.S., and the U.S. withdrawing from the Paris Climate Agreement, President Donald Trump "has done his best to follow through on a course to derail prior climate actions," Kartha said.

Emerging technologies also bear watching for threats to global security, BAS's Science and Security Board representatives said in a statement. The rapid spread of disinformation, erosion of trust in science, the media, "and in facts themselves," as well as attempts to influence democratic elections through hacking, raise concerns about protecting the infrastructures that channel information and evidence, and creating safeguards against malicious cybernetic attacks, according to the statement.

Since 2015, the Doomsday Clock has undergone annual updates, but that wasn't always the case. After the clock was introduced in 1947 — as a cover illustration for the BAS' magazine, when it was set at 7 minutes to midnight — it has been reset 23 times, updated over the following decades depending on world events and threat levels. Sometimes, years would pass without a revision, according to a BAS timeline.

Updates were more frequent during the 1960s, when the Cold War between the U.S. and the Soviet Union inflamed global tensions and stoked fears of nuclear attacks. But the decade closed with the clock at a hopeful 10 minutes to midnight in 1969, after global leaders signed a treaty in 1968 to collaborate in the development of nuclear power without producing new nuclear weapons.

The number of Doomsday Clock updates rose again during the 1980s, reflecting renewed deterioration of U.S. and Soviet relations. Then, in 1991, with the Cold War finally at an end and initiatives underway in the U.S. and Russia to reduce nuclear arsenals, the clock made its biggest jump backward yet, landing at 17 minutes to midnight.

But more recently, over the past decade, the hands have only moved forward, and in 2015, the hands spun ahead to 3 minutes to midnight. There was no change in 2016, but 2017 saw the Doomsday Clock's hands sweeping forward 30 seconds, bringing the time to 2 minutes and 30 seconds before midnight.

At the time, this was the closest the clock had come to midnight in over 60 years. [End of the World? Top 10 Doomsday Threats]

By the beginning of 2017, the Science and Security Board found the danger to humanity to be "even greater" and "the need for action more urgent," they reported in a statement. "During the past year, the need for leadership only intensified — yet inaction and brinksmanship have continued, endangering every person, everywhere on Earth," they warned.

And as 2018 begins with the clock's hands 2 minutes from midnight, the urgency for addressing these issues is arguably greater than ever before.

Though 70 years have passed since the Doomsday Clock debuted, global threats to human survival from nuclear weapons and climate change still loom large. But while human activity has set the stage for planetwide peril, human action may still change the course of our future. The ongoing changes to the Doomsday Clock not only serve as a warning about a dire situation but are also a call to action to shape a safer and more sustainable path for us all, Kennette Benedict, a senior adviser to the BAS, said in a statement.

"Humans invented both nuclear weapons and the fossil-fuel-powered machines that contribute to climate change; we know how they work, so presumably, we can find ways to reduce or eliminate the harm," Benedict said.

"But we need concerted cooperation worldwide to prevent calamity," she added.

The clock may yet roll back from the 2-minute mark; after all, it did in 1960, when BAS reset it to 7 minutes to midnight. But it will only happen if leaders can renew the commitment to end nuclear weapons building and stockpiling — within their own borders and in countries worldwide — and redouble efforts to curb greenhouse gas emissions and limit the effects of climate change, according to the BAS 2018 statement.

In fact, the point of the Doomsday Clock is to encourage leaders and individuals to confront the dire importance of these complex issues and to encourage conversations that will ultimately lead to solutions — and to a safer world for us all, Rachel Bronson, BAS president and CEO, told reporters today.