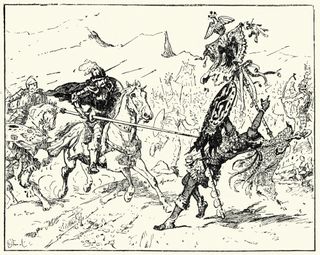 The Europeans killed so many indigenous Americans during the 16th century — through warfare and by causing disease and famine — that it actually cooled the planet during the Little Ice Age, a new study suggests.

Essentially, once these tens of millions of people died in North, Central and South America, they could no longer farm. The forest then crept in, taking over farmland and doing what plants and trees do best: breathe in carbon dioxide (CO2). This process decreased the amount of CO2 in the atmosphere, leading to widespread cooling, the researchers said.

However, not everyone is convinced by this argument. Two experts Live Science interviewed called the idea "interesting" but said that more research is needed to support the claim. [10 Things We Learned About the First Americans in 2018]

What's not in dispute is the sheer number of indigenous people who died as the Europeans colonized the New World. In an exhaustive review, the researchers of the new study combed through historic population estimates, finding that there were about 60.5 million people living in the Americas before the Europeans arrived in 1492. (For comparison, at that time, there were between 70 million and 88 million people living in Europe, which had less than half the area of the Americas, the researchers said.)

In the 100 years that followed, warfare, slavery and diseases such as smallpox, measles, influenza and cholera wiped out approximately 90 percent of these inhabitants, leaving a mere 6 million indigenous men, women and children alive in 1600, said study lead researcher Alexander Koch, a doctoral student in the Department of Geography at University College London.

This event was so catastrophic, it's called the Great Dying, Koch told Live Science.

As the Great Dying progressed, forests took over indigenous land, Koch said. To determine about how much farmland was likely abandoned as indigenous people died, Koch and his colleagues looked at studies showing how much land current-day indigenous societies use per person. "We can then translate that into what the societies might have used back in the day," Koch said.

Granted, not all indigenous cultures used land the same way. In the American Northeast, some of the Native Americans farmed. Other groups used fire-based hunting strategies, in which they burned large areas to channel animals into corridors where people could hunt them, Koch said. Meanwhile, there was high-intensity farming in areas such as Mexico and the Andes, he said.

In all, about 216,000 square miles (56 million hectares) of land — an area about 1.3 times the size of California — transitioned from farmland to wilderness, Koch found.

This transition to wilderness was likely responsible for a drop in global atmospheric carbon dioxide — by 7 to 10 parts per million (ppm), according to data from Antarctic ice core studies — that occurred in the late 1500s and early 1600s, Koch said. In turn, this change in CO2 lowered surface air temperatures globally by 0.27 degrees Fahrenheit (0.15 degrees Celsius), the researchers wrote in the study.

By then, the Little Ice Age, a period that lasted from about 1300 to 1870, was well underway. At this time, many places around the world got cooler, with global temperatures reaching their lowest points during the period in the 16th century, the researchers said. [10 Surprising Results of Global Warming]

Much of the Little Ice Age was likely caused by volcanic eruptions and lower solar activity, but the Great Dying may have also contributed to cooler temperatures during that time, Koch said.

The researchers are likely overstating their case,, said Joerg Schaefer, a Lamont research professor in geochemistry at the Lamont-Doherty Earth Observatory of Columbia University in Palisades, New York, who was not involved with the study. "I am absolutely sure this paper does not explain the cause of the carbon dioxide change and the temperature change during that time."

It's still a highly interesting paper, though, Schaefer said. "The biggest positive impact of that paper will be that it's so controversial, it will trigger a lot of discussion and follow-up from research," he told Live Science.

Meanwhile, other researchers have come to the opposite conclusion, said Gifford Miller, a professor of geological sciences at the University of Colorado Boulder and the associate director at the university's Institute of Arctic and Alpine Research. For instance, a 2016 study in the journal Nature Geoscience found that photosynthesis decreased during the Little Ice Age, meaning that forest regrowth wouldn't explain the drop in carbon dioxide.

"I don't have a strong opinion as to who is right here," Miller, who was not involved in the new study, told Live Science. "But at least we're saying that there is an alternative explanation" that comes to very different conclusions than those of Koch and his colleagues.

However, even if the new study is onto something, it definitely does not imply that killing people is a good way to solve the challenges of climate change, Koch said.

"Killing people is not the way to go for tackling our present-day problems," Koch said. "We need to cut down our fossil fuel emissions and not by killing people."

The study will be published online in the March 1 issue of the journal Quaternary Science Reviews.