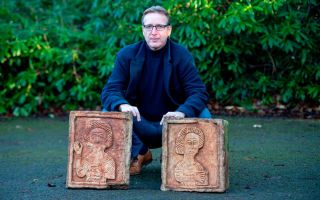 In 2004, two chunky limestone reliefs depicting Catholic saints were stolen from a medieval church in Burgos, Spain. The reliefs dated to the seventh century, weighed about 110 lbs.(50 kilograms) apiece and were thought to be worth many millions of dollars. Earlier this week, professional art detective Arthur Brand found them — moldering in the dirt and leaves of a British country garden.

"The thieves wanted to sell [the reliefs] and make a lot of money, but soon found out they stole world heritage that would be extremely difficult to sell," Brand told the French news site AFP (Agence France-Presse). "So, they decided to sell them as garden ornaments." [30 of the World's Most Valuable Treasures That Are Still Missing]

According to AFP, those "ornaments" were purchased several years ago by a well-off British aristocrat who had no idea about their true provenance. Brand, who spent eight years tracking the reliefs from dealer to dealer across Europe, estimates that the unwitting aristocrat probably spent about $65,000 (50,000 pounds) apiece to add the artifacts to his estate's garden north of London.

Sounds expensive for a trumped-up lawn gnome — but the buyer actually got an epic deal. The true value of the reliefs, Brand told AFP, is "priceless."

"You can imagine how horrified they were to learn that their garden ornaments were in fact priceless stolen Spanish religious art," Brand said. "They got quite nervous, because these priceless 1,300-year-old artifacts that were made for the Spanish sun were in their garden, exposed to the English rain."

Following this revelation, the artifacts were safely returned to the Spanish embassy in London on Monday (Jan. 21), AFP reported. They will be restored to Spain's Santa Maria de Lara church, which was declared a national monument in 1929. The church was built more than 1,000 years ago by Visigoths — a Germanic culture that ruled much of France and the Iberian peninsula between the fifth and the eighth centuries — and is thought to be one of the oldest Catholic churches in Spain, the director of the nearby Burgos Museum told Spanish news site El Pais.

Brand has been nicknamed the "Indiana Jones of the art world" for his impressive track record of relocating stolen objects. Some of his notable finds include a 1,600-year-old mosaic stolen from a church in Cyprus when Turkey occupied the country in 1974 (and finally recovered from a family in Monaco in 2018), two bronze horse sculptures commissioned by Adolf Hitler during World War II, and numerous works stolen from Jewish families during the Holocaust.