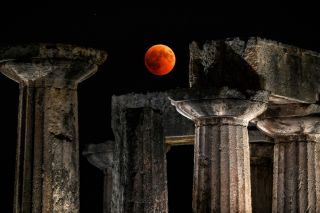 The longest blood moon eclipse of the century occurred on July 27, 2018. Here, the lunar eclipse on that night can be seen over the temple of Apollo in Corinth in Greece.
(Image: © Valerie Gache/AFP/Getty Images)

If you live in the continental United States, tonight (Jan. 20) is a great night to take a gander at the sky.

As the clock ticks toward midnight on the East Coast, the moon will become increasingly cloaked in red shadows in the longest lunar eclipse visible from North America for years.

This eclipse has been dubbed the Super Blood Wolf Moon eclipse. The Wolf Moon is the traditional name for January's full moon. "Blood" is for the vermilion hue that shades the moon during a lunar eclipse. And the "super" is there because this January's full moon also happens to be a "supermoon," meaning the moon is passing at the closest point of its orbit to Earth. [How to Watch Sunday's Super Blood Wolf Moon Eclipse]

Lunar eclipses happen in three phases: penumbral, partial and total. The penumbral phase will start at 9:36 p.m. EST (6:36 p.m. PST) on Jan. 20. Earth will be positioned between the sun and the moon at that time, and the moon will just be sliding into the very outer shadow of the planet. This phase is extremely subtle and hard to see.

At 10:34 p.m. EST (7:34 p.m. PST), the partial phase of the eclipse will begin. This is when the moon moves into the darkest part of Earth's shadow, the umbra. It will be visible as a reddish darkness creeping across the moon's face.

The pinnacle of the show will occur between 11:41 p.m. EST (8:41 p.m. PST) and 12:43 p.m. EST (9:43 p.m. PST), when Earth's umbra will entirely engulf the moon. Our natural satellite will appear rusty and dark, because a tiny bit of sunlight will slip through Earth's atmosphere. The atmosphere will scatter the light, preferentially allowing red wavelengths through. This light will then hit the moon, creating the blood-red effect.

The science of the eclipse

Technically, this lunar eclipse will also appear larger than other, non-supermoon eclipses, but the casual observer may struggle to tell a difference. The moon's orbit is not a perfect circle, so sometimes it swings closer to Earth, while other times it's a bit farther out. The close passes are called perigee.

The moon looks about 14 percent wider during perigee compared to apogee, said Bruce Betts, the chief scientist of The Planetary Society, a nonprofit space organization. That means the moon looks a little brighter to the naked eye at this time, "but you'd have to be paying attention to notice the effect," Betts said.

(Giant moon images that often accompany "supermoon" news articles online are frequently either doctored or taken with a telephoto lens to display a different phenomenon, the "moon illusion." This phenomenon makes the rising or setting moon appear larger than when it is higher in the sky, probably due to the contrast with the horizon, trees or buildings.)

Lunar eclipses happen only during full moons, because a full moon is what's visible when the moon is on the far side of Earth from the sun. So, why doesn't every full moon bring a lunar eclipse? That, Betts told Live Science, is all due to the tilts of the various orbits involved. Earth, of course, is tilted on its axis. The moon's orbit, in turn, is tilted relative to Earth's orbit. Most of the time, when Earth is between the sun and the moon, the moon is far enough off-center for the sun's light to still hit the moon's full face.

"A couple times a year, you'll get an opportunity for things to line up, so you'll get the sun, Earth and moon lined up enough for the moon to enter the Earth's shadow," Betts said.

The math is a headache, but these moments are very predictable. The next total lunar eclipse visible from Earth will occur on May 26, 2021. That show will be visible from much of the Americas, but unlike the hour-long total eclipse of this weekend, the 2021 total eclipse phase will last a mere 15 minutes.

"If people want to see a total lunar eclipse," said Paul Hayne, an astrophysicist at the University of Colorado Boulder, "now is their best chance for the next few years."