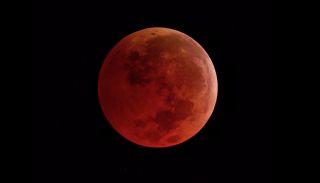 On Sunday, a super blood moon lunar eclipse will sweep across the sky.
(Image: © NASA)

On Sunday (Jan. 20), the moon, snuggled up as close as it ever does to Earth, will pass through our planet's shadow and put on a show for millions across North and South America.

Read on to find out how you can watch this super blood moon lunar eclipse in the U.S. And, unlike a solar eclipse, you can watch with bare eyes, binoculars or a telescope.

If you just want to see the thing, you can walk outside at 12 minutes past midnight on the U.S. East Coast (9:12 p.m. on the West Coast) and look up. That's when the eclipse will be at its climax — the Earth, moon and sun will be exactly lined up in an eclipse. [Why Does the Moon Turn Red During a Total Lunar Eclipse?]

But, if you have hand warmers and a large hat and scarf, you can stick around for the moon's full dance through Earth's shadow. At about 9:36 p.m. EST (6:36 p.m. PST), the moon will first move into part of Earth's shadow, called the penumbra.

This is when the eclipse will start — Earth's shadow will block some sunlight from reaching the moon, but not all of it. The moon will slightly dim as it moves into and across the penumbra, but observers will only notice the dimming very slightly, if at all, according to NASA's Jet Propulsion Laboratory.

Then, things will start to heat up.

At 10:33 p.m. EST (7:33 p.m. PST), the moon will move farther behind Earth and the sun, and part of it will enter our planet's darker shadow, called the umbra. Once this happens, one side of the moon will begin to darken, like someone is erasing chunks of it from the side.

This will continue until our sole satellite is fully within the umbra at 11:41 p.m. EST (8:41 p.m. PST). But the sky won't turn completely black — molecules in our atmosphere will make it so that red light from the sun will bend into Earth's shadow, according to NASA.

Though these times mark the moon's location in the sky relative to Earth and the sun, the very nature of the eclipse — such as the shade of red it turns — will depend on weather and atmosphere conditions that day. Because it's a supermoon, it might turn a darker shade than it would if the moon were farther away from Earth during the eclipse, according to NASA.

You can watch the eclipse with others at viewing parties that will take place across the U.S., such as at the Oregon Museum of Science and Industry; Texas A&M International University; the University of California, Irvine; Rowan University in Glassboro, New Jersey; and the Adler Planetarium in Chicago. Call your local planetarium or university to see if there might be a viewing party nearby.

The eclipse will also be visible partially in other parts of the world, except around Asia and Australia.

And if it's cloudy where you live, don't fret! There will be livestreaming of the eclipse online, such as at timeanddate.com and the Virtual Telescope Project.