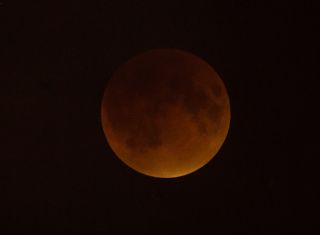 A rare lunar treat will greet early (very early) risers Wednesday (Jan. 31), when the full moon (a supermoon due to the satellite's nearness to Earth) passes through Earth's shadow. During the so-called Super Blue Blood Moon lunar eclipse, the face of the moon will turn a brick-red hue.

The fiery glow is the most dramatic of the three types of lunar eclipses (the other two are called partial and penumbral). In addition, perfection is a must: A total lunar eclipse happens only when the sun, Earth and moon are perfectly lined up. In fact, this combination of supermoon, blue moon and total eclipse hasn't happened in more than 150 years.

When the moon tiptoes into the outer portion of Earth's shadow, becoming totally bathed in the darkest part of that shadow, why isn't the result a "lights out" for the sky? Why instead does the moon become engulfed in a light-orange to blood-red glow?

Here's why: Picture yourself standing on the moon (lots of dust and craters at your feet), looking down on Earth during the spectacular night-sky event. When the Earth is directly in front of the sun — blocking the sun's rays from lighting up the moon — you'd see a fiery rim encircling the planet. [Infographic: Total Eclipse of the Moon]

"The darkened terrestrial disk is ringed by every sunrise and every sunset in the world, all at once," according to NASA. Even though our planet is way bigger than the sun, our home star's light bends around the edge of Earth. This light gets reflected onto the moon.

But not before it travels through our atmosphere, which filters out the shorter-wavelength blue light, leaving the reds and orange unscathed to bathe the moon's surface. And voila, a red moon.

The moon will change various shades during different stages of a total lunar eclipse, going from an initial grayish to orange and amber. Atmospheric conditions can also affect the brightness of the colors. For instance, extra particles in the atmosphere, such as ash from a large wildfire or a recent volcanic eruption, may cause the moon to appear a darker shade of red, according to NASA. [Lunar Eclipses: What Are They & When Is the Next One?]

The moon doesn't always hide completely behind Earth's shadow. During partial lunar eclipses, the sun, Earth and moon are slightly off in their alignment and so our planet's shadow engulfs just part of the moon.

A novice skywatcher might not even notice the third type of lunar eclipse, the penumbral kind, in which the moon sits in Earth's penumbra, or its faint outer shadow.

Wednesday's total lunar eclipse is expected to be visible from Asia, Australia, the Pacific Ocean and western North America.

Editor's Note: This article was first published in 2016 and updated for the Super Blue Blood Moon lunar eclipse of 2018.