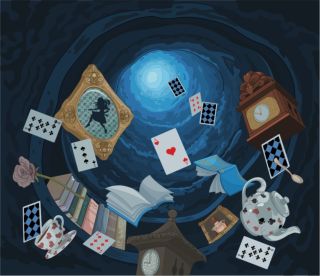 At first, the man couldn't believe his eyes. The icons on his desktop computer were slowly jumping out of his monitor, hovering in the space between him and the screen.

For 10 minutes, these icons wavered in his vision before eventually disappearing off to his right side.

These strange symptoms and others sent the 54-year-old man to the emergency room, where doctors soon diagnosed him with a curious malady called Alice in Wonderland Syndrome, according to a recent report of the man's case. [Image Gallery: Slicing Through the Brain]

But the man's episode is the first known case of the syndrome being caused by a glioblastoma, an aggressive form of brain cancer, the doctors wrote in the report, which was published online Jan. 2 the the journal Neurocase. Just like it sounds, the name Alice in Wonderland Syndrome was taken from the trippy but classic book by Lewis Carroll. Just as the hookah-smoking Caterpillar tells Alice, "One side will make you grow taller, and the other side will make you grow shorter," in reference to a mushroom, people with this syndrome may have "an erroneous perception of their own body, affecting both size and position in the space, as well as alteration of the surrounding environment," the doctors wrote in the report.

In the man's case, his Alice in Wonderland episode was followed by a pulsating headache, nausea and extreme sensitivity to light.

During their examination of the man, the doctors learned that he experienced monthly migraines and that he had a family history of brain tumors. However, a neurological exam was unremarkable, as were an electroencephalography (EEG) and a computed tomography (CT) scan of the man's brain.

Perplexed, the doctors transferred the man to the neurology department, where he underwent yet another test, a magnetic resonance imaging (MRI) scan. This scan revealed the culprit; an inch-long (2.5 centimeters) lesion in the left temporal-occipital region of his brain, which turned out to be a glioblastoma.

The temporal-occipital region of the brain is involved with spatial perception and orientation. It makes sense, therefore, that a lesion there would make the man see strange visions, said Dr. Sylvia Kurz, a neuro-oncologist at the Brain Tumor Center, which is part of the Perlmutter Cancer Center at New York University's Langone Medical Center. Kurz was not involved with the man's case.

"What I see in my everyday life is that brain tumors can present any kind of neurological symptom, depending on where the tumor is located," Kurz told Live Science.

Migraines can also visual symptoms, but in the man's case, the doctors were able to them rule out because the man said he never experienced with migraines with auras. Auras refer to a blurry or zigzag-like visual perception that some people experience when they have migraines. [Senses and Non-Sense: 7 Odd Hallucinations]

Kurz commended the doctors for their detailed exam of the man. "Even if a patient has a long-standing history of headaches, if there's something new about a headache or something that has never occurred with this headache, it always warrants a very thorough evaluation," Kurz said. "And the most detailed evaluation of the brain from an imaging perspective is really a brain MRI scan."

Kurz added that because glioblastomas grow quickly, it's likely that the tumor had formed within the past few months before he saw the computer icons leap off the screen.

The patient immediately had surgery to remove the tumor with a laser, and continued treatment with a regimen of chemotherapy and radiation. About one year later, the man was back at the hospital for another operation after his tumor came back in the same spot.

But so far, the treatment has worked. Twenty months after the Alice in Wonderland Syndrome episode, the man is doing well, with no evidence of the glioblastoma, the doctors said. (The median survival time for glioblastoma is 11 to 15 months, according to the American Brain Tumor Association.)