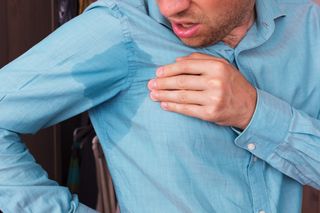 There's nothing strange about breaking out into a heavy sweat on a sweltering day, or, after some serious physical activity.

But if you regularly started sweating heavily for no apparent reason — and on a monthly basis, for that matter — well, that might be a cause for concern.

That's what happened to a 60-year-old man from Wisconsin who experienced profuse sweating episodes on a monthly basis for three years. Each month, the man would break into a heavy sweat for several minutes at a time over a 13-hour period, according to a new report of his case. [27 Oddest Medical Case Reports]

At first, the cause of the man's sudden, repeated sweating episodes — known medically as "cyclical sweating" — was a mystery to doctors.

The patient had been seen by specialists at various hospitals and was told he had "hyperhidrosis," which just means excessive sweating, said lead case report author Dr. Mark Chelmowski, an internal medicine physician and geriatrician at Advocate Aurora Health Care in Milwaukee, who treated the man. But no one knew why he had the condition, Chelmowski added.

Hyperhidrosis can have a number of causes, including obesity, anxiety or an overactive thyroid, according to the case report. It may also occur in people who have certain infections or cancer, or as a side effect of taking certain medications. But in the man's case, none of these was the culprit.

Determined to get to the root of the problem, the man kept meticulous track of his sweating episodes each month, noting when and how frequently they occurred and how long they lasted. This was valuable information for Chelmowski, who wanted to observe one of the episodes in person. So, with a good sense of when he was due for a sweating episode, the man scheduled an appointment with Chelmowski.

The man's meticulous tracking proved accurate: While in Chelmowski's office, the man said that he felt the sweating episode coming on, and, about 10 seconds later, it began. Not long after sweat appeared on his skin, the man lowered his head into his hands and began responding to the doctor's questions more slowly than before, for about 2 minutes, according to the case report.

Sweat was pouring off him, Chelmowski told Live Science, and a puddle of perspiration accumulated on the desk where the man had rested his elbows, he noted.

Five minutes after the episode ended, the man was fine, Chelmowski said. But he had gained a valuable clue observing the incident: He noticed that the man's level of responsiveness was altered during the event, which suggested a root cause in his brain: namely, a seizure.

The reasons people typically sweat are because they are releasing body heat or experiencing certain emotions, Chelmowski said — two processes that are regulated by the brain. In this man's case, the seizures in the temporal lobe of his brain were activating a pathway that leads to sweating, Chelmowski noted.

Once the cause of the man's cyclical sweating was diagnosed, doctors treated him with anti-seizure medication. It took awhile to get his sweating episodes under control, but in the last 18 months, the man has had only one cluster of sweating episodes, according to the case report.

The case report was published today (Jan. 14) in the journal Annals of Internal Medicine.