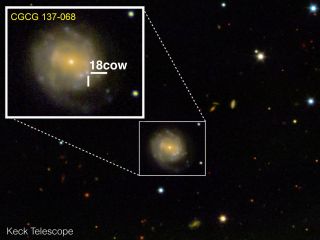 On June 16, 2018, a cosmic explosion called "Cow" blazed out of the Hercules constellation 200 million light-years away. Scientists now believe it to be the exact moment a black hole or neutron star was born, observed from Earth for the first time ever.
(Image: © Raffaella Margutti/Northwestern University)

On June 16, 2018, a stupendously bright explosion tore across the cosmos and lingered in the sky above Earth for several weeks. The mysterious blast traveled 200 million light-years from the gut of the Hercules constellation, shone with the light of nearly 100 supernovas and captured the attention of the world's stargazers until, finally, it vanished from the sky as mysteriously at it appeared.

Astronomers named it "The Cow."

From the moment of its discovery, scientists knew that The Cow (officially named AT2018cow, which is a procedurally generated name) was no typical supernova. Now, months later, a team of international researchers is prepared to argue that The Cow is actually an incredible astronomical first: the birth of either a black hole or neutron star, witnessed live from Earth for the first time in recorded history. [When Space Attacks: 6 Craziest Impacts]

"We know from theory that black holes and neutron stars form when a star dies, but we've never seen them right after they are born. Never," Raffaella Margutti, an astrophysicist at Northwestern University in Evanston, Illinois, and lead author of a forthcoming paper on The Cow, said in a statement.

Secrets of a dead star

Margutti, who presented her team's findings at the 223rd meeting of the American Astronomical Society Thursday (Jan. 10) in Seattle, joined colleagues from a dozen different observatories to study The Cow through as many different lenses as possible. Telescopes around the world observed the blast as it glowed to peak brightness in just a few days, then fizzled out of sight shortly after. From there, scientists imaged the explosion's invisible residue in X-rays, radio waves and gamma-rays to help untangle its perplexing anatomy.

Through these image sources combined, the team learned that The Cow's death was truly unlike any stellar demise studied before.

For starters, The Cow worked exceedingly quickly. After suddenly bursting into being, The Cow depleted most of its energy within 16 days, casting out particles of hydrogen and helium at about 10 percent of the speed of light. According to Margutti, this timeline is significantly faster than many known stellar explosions, which can take years to flare up and die off.

Luckily, once The Cow's initial blast died down, astronomers had a relatively clear view of what Margutti called the "central engine" powering it. Something massive was heating and stirring the blast zone from the inside, causing radiation to spiral out of the center for months after the visible light had dimmed.

Front-row seats for a cosmic collapse

All observations pointed to the formation of a black hole or neutron star — two massively compact objects that can form when giant stars reach the end of their lives and collapse in on themselves. The stupendous glow that reached Earth on June 16 likely came from a huge amount of stellar matter suddenly being sucked in by the object's gravity at near light-speed.

If Margutti and colleagues are correct, then The Cow represents the first-ever direct observation of a black hole or neutron star forming. And, conveniently, it happened relatively close to Earth.

"Two hundred million light-years is close for us," Margutti said. "This is the closest transient object of this kind that we have ever found."

Studying The Cow further could reveal valuable insights about the amazing moment when massive stars die and compact objects like black holes are born. Let's hope scientists milk it for all it's worth.