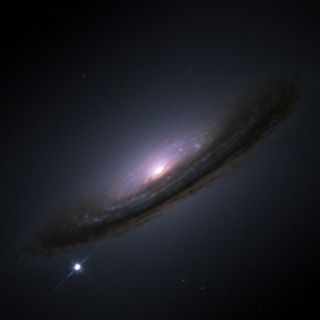 Australian National University astrophysicist Brian Schmidt chose this Hubble photo of Supernova SN 1994D as his favorite space image, which he called "the poster child of a type Ia supernovae." The supernova is the bright spot on the lower left, shown near the galaxy galaxy NGC 4526. Schmidt won the 2011 Nobel Physics prize for his studies of distant supernovas that helped reveal the existence of dark energy.
(Image: © NASA/ESA, The Hubble Key Project Team and The High-Z Supernova Search Team)

The wonder of the cosmos.The beauty of the heavens. Such phrases come easily to mind when contemplating space, which is just such a photogenic place.

Looking up at the night sky has inspired humanity for eons, and the first photographs taken of space changed our relationship with the sky forever. Then, the first photos taken from space, both of distant galaxies and of our own planet, revolutionized our understanding of our place in the cosmos again.

Many seminal images stand out in the history of astrophotography, with some pictures universally adored and others special to individuals for personal reasons.

We asked scientists, photographers, authors and historians for their favorite space photographs and found a diversity of choices, as well as some popular recurring favorites. [Gallery: Experts' Favorite Space Photos]

The most-nominated photo we received was without a doubt "Earthrise," the first picture taken of planet Earth bypeople orbiting the moon. This shot was captured by Apollo 8 astronaut Bill Anders on December 24, 1968, as his spacecraft became the first to fly around the moon.

"It was iconic for the environmental movement," said astronomer Jill Tarter, co-founder of the SETI (Search for Extraterrestrial Intelligence) Institute in Mountain View, Calif. "It allowed us to see ourselves as Earthlings living on a single, fragile, beautiful planet. This perspective is even more important today. Many of the challenges we face require long-term thinking and global cooperation; they do not respect national boundaries."

Tarter called her selection of this picture as her favorite a "no-brainer," and she wasn't alone. Former astronaut Pamela Melroy, one of only two women to command the space shuttle, selected "Earthrise," too.

"In space, new vantage points always result in striking images — we saw that all the time as the space station was assembled, and cameras and windows opened up new views of the space shuttle and International Space Station in ways that always surprised us," Melroy told SPACE.com. "But the first view on Apollo 8 of Earthrise had to have been the biggest surprise ever —a new view of spaceship Earth!"

Sobel called out the picture of Earth, as well as the Hubble Space Telescope's famous "Hubble Deep Field" photo, which offered the deepest view yet of the universe when it was taken in 1995, by combining light gathered over many hours to reveal thousands of distant galaxies.

"Both [photos] set the mind ajar, spring surprises on the senses," Sobel said.

"To break the tie with something fresher, I'll mention a recent one, that's actually far from beautiful, but that I find meaningful and deeply moving," Wilczek said. The photo he picked is called "Earth From Mars," which was taken by NASA's Mars Exploration Rover Spirit on March 8, 2004. It was the first image of Earth seen from the surface of a planet beyond the moon.

Astronomer Greg Laughlin of the University of California, Santa Cruz nominated an image of the crescent planet Neptune and its crescent moon Triton taken by NASA's Voyager 2 spacecraft in 1989.

In some cases, the meaning behind a photo eclipses its aesthetic qualities. That may be the case for a photo of helmets and spacesuits covered in lunar dust after the last manned moonwalk, from the 1972 Apollo 17 mission.

"It symbolizes NASA at its best, and our exploration aspirations for the future," said Southwest Research Institute planetary scientist Alan Stern, who chose the photo.

Solar scientist Phillip Chamberlin's pick can be appreciated by anyone for its pure beauty, but this photo of the sun has special meaning to the researcher, who is deputy project scientist for NASA's Solar Dynamics Observatory (SDO) at theGoddard Space Flight Center in Greenbelt, Md.

"When we first started getting data, after years of work on building the SDO instruments and spacecraft, launching SDO, and early ops, we took our first images and this is what we saw with AIA, [SDO's Atmospheric Imaging Assembly instrument]," Chamberlin said. "Absolutely amazing."