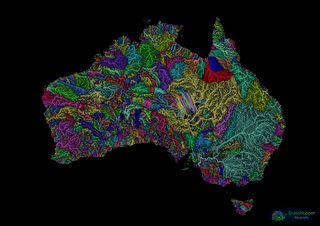 Seventy percent of Australia qualifies as arid or semi-arid, according to the Australian government.
(Image: © Robert Szucs, Cartographer)

Rivers get the rainbow treatment in a gorgeous series of maps from a Hungarian cartographer.

Available for download on Etsy, the maps are both beautiful and scientifically accurate. Their creator, Robert Szucs, has a background in geographic information systems (GIS) but was bored by standard river maps with "all the lines blue, all the same width." [Rainbow Rivers: See Gorgeous Maps of the World's Waterways]

"Uninspiring," he told Live Science. "I felt I might be able to do better."

Since 2016, Szucs has been offering his maps on Etsy, where nearly 4,000 buyers seem to agree that he's done better. Selling the maps was originally just a hobby, he said, but "the whole thing exploded within weeks." News outlets (including Live Science) featured his work and brought in new customers. He decided to try to make a living with his art.

Szuc has since made maps of single U.S. states, entire countries, continents and even the whole globe. Each river basin is depicted in a color unique to that river, with thicker lines for larger waterways. It takes Szucs days to weeks to input data from various geographical sources and then tweak the size and colors of each line, he said.

"It's a beautiful marriage of science and arts, and that's where I'm at home," he said.

Szucs also makes maps of forest color, maps of elevation that reveal topography and maps showing population density. He does custom orders, he said, so there are always new countries or states to map. He's also got a few plans for the future.