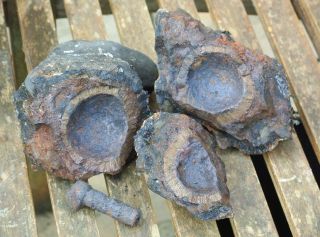 The grenade consisted of a hollow iron shell filled with gunpowder, which would have been lit by a fuse that passed through the shell.
(Image: © Robert Felce)

Ancient hand grenades and cannons from the wreck of a former pirate ship have been found along the coast of Cornwall in the U.K.

Divers spotted artifacts from the wreck of the Schiedam, which sank off the coast in 1684, after recent storms disturbed the sand that once covered them on the seafloor.

In addition, the two 17th-century hand grenades, each consisting of a hollow iron shell filled with gunpowder, were found nearby, after being washed ashore from the wreck. [See Photos of the Pirate Ship, Grenades and Other Artifacts]

Local historian Robert Felce found the second of the two hand grenades late November on a beach near the Schiedam shipwreck site at Dollar Cove, in the coastal Gunwalloe district of Cornwall's Lizard Peninsula.

Felce told Live Science that he often visited the beach, which is exposed to strong waves from the Atlantic, and where several artifacts have washed up over the years — he found a similar grenade on the same beach last year.

Both objects were heavily encrusted after lying on the seafloor for more than 300 years, and Felce said he at first thought the latest grenade was an ordinary rock until he slipped and dropped it, and it broke open, revealing the two halves of the metal weapon and the explosive powder inside.

Although the gunpowder in the grenade was damp and several centuries old, he reported the find to the local police, who called in bomb-disposal experts from the British Army to ensure that it was safe to handle.

Felce said that curtains in his quiet coastal village of Mullion were "twitching" when the bomb-disposal vehicle arrived at his house with flashing blue lights; and the army experts quickly made the grenade safe by scraping out the ancient gunpowder inside.

In 1683, Barbary pirates captured the Schiedam — a Dutch merchant ship — as a prize. Subsequently, Britain's Royal Navy seized the ship, using it to transport stores until it sank in a storm near Dollar Cove in April of 1684. [The Most Notorious Pirates Ever]

The Schiedam was carrying military stores from the English garrisons returning from the city of Tangiers in Morocco when it sank. Those stores included several boxes of grenades, like the ones that washed up at Dollar Cove.

Felce, the author of several histories of the Cornish coast, said that the explosive grenades were some of the earliest examples of their kind, and that they were used by English troops who were specially trained to throw them long distances.

At a later date, such troops formed the first English regiments of grenadiers — a title still used by some British Army regiments today, Felce said.The grenades were detonated by lighting gunpowder in a tube-like fuse that passed through the outer shell.

"They may have been used to frighten, but they were certainly intended to kill the enemy," Felce said. "I would like to know more about where and how they were constructed, because it involves early engineering and metallurgical skills."

Recent storms have disturbed the sand over the wreck of the Schiedam, revealing several cannons and other debris from the ship that still lie beneath the seafloor.

The shipwreck site was rediscovered off the coast about two years ago by two divers from the private research group Cornwall Maritime Archaeology, which keeps watch on several wrecks along the Cornish coast on behalf of the Historic England agency.

One of the divers, Mark Milburn, told Live Science that they had returned to the undersea shipwreck site in recent weeks, where they found that the sand had shifted during recent storms, uncovering more debris.

He said that the artifacts from the Schiedam wreck documented so far include 11 cannons, a gun carriage wheel, lead musket shot, boxes of hand grenades and several other iron objects.

Milburn said that some of the cannons and the few remaining pieces of timber from the wreck had been captured as 3D photogrammetry models by his colleague, the diver and author David Gibbins. They can be viewed on his website.

"There is very little of the timber structure left," Milburn said. "Each time the site is exposed, it suffers some damage. … We will continue to monitor the site, [and] we have permission to recover any artifacts we deem at risk."