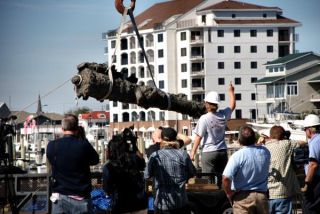 Steady! Steady! A crowd watches as one cannon is hoisted above the wreckage of Blackbeard's ship, in October 2011.
(Image: © Karen K Browning/NC Department of Cultural Resources.)

Ahoy! A team of archaeologists plans to recover eight cannons from the wreck of Blackbeard's pirate ship this summer off the coast of Beaufort Inlet, N.C., according to a news report. The team hopes to lift three of the cannons from the wreckage this week, WUNC reported. The ship sank in June 1718, after running aground nearby.

Despite being an infamous pirate, little is known about Blackbeard, whose real name is believed to have been Edward Teach or Thatch. He is thought to have served as a privateer during Queen Anne's War (1701 – 1714) and afterward turned to piracy.

The site the shipwreck is about 55 percent excavated, Fay Mitchell, from the Department of Cultural Resources, told WUNC. "The goal is to complete excavation at the site in 2014 ... This time they want to do the heavy lifting." One cannon from Blackbeard's ship was recovered in 2011.