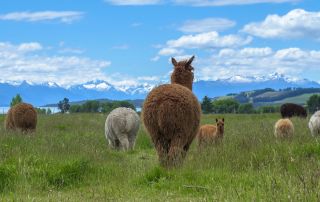 WASHINGTON, D.C. — Traces of 1,000-year-old poop in Peruvian soil could reveal the history of alpaca domestication in the region.

Researchers analyzed sediments from cores extracted from lakes in southeastern Peru. They were looking for chemical "fingerprints" of compounds called sterols, which appear when cholesterol is broken down during digestion, and are expelled in feces, the scientists reported today (Dec. 10) in a presentation at the annual meeting of the American Geophysical Union (AGU). [5 Things Your Poop Says About Your Health]

One type of sterol, 5b-stigmastanol, is associated with the guts of ruminants — animals that chew their regurgitated cud — such as alpacas. Another type, called coprostanol, is produced in the human gut.

By evaluating the ratio of alpaca poop-chemical to human poop-chemical, researchers were able to estimate when human populations may have begun domesticating and living alongside alpacas.

In samples from Lake Arapa in Peru, alpaca sterols became more prevalent after the beginning of the Wari Empire (about A.D. 600) and were well-established by the time of the Inca Empire, around A.D. 1400, research co-author Thomas Elliott Arnold, an organic geochemist and postdoctoral scholar with the Department of Geology and Environmental Science at the University of Pittsburgh, told Live Science.

Since 5b-stigmastanol is found in other ruminants, such as deer — which are also native to that part of Peru — is it possible that the sterols in the samples could represent deer instead of alpaca? Not really, Arnold said, because there isn't a good explanation for what might have caused a sudden and dramatic increase in deer populations in A.D. 1,000, when the researchers found a sterol spike.

"You'd have to assume a bunch of deer suddenly went on a mating frenzy and congregated in and around the Orurillo region," Arnold said.