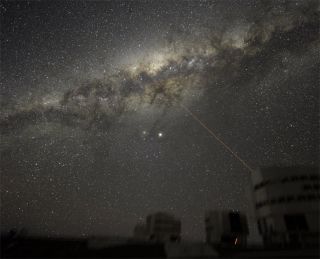 Scientists started watching crystals sparkle in the 1990s. Those crystals sparkled more in the summer, which researchers took as evidence of dark matter. But those scientists were probably wrong, new research suggests.

Scientists have very good reason to believe that dark matter exists — that there's some unseen stuff tugging on everything with its gravity but that's invisible to our telescopes. But they don’t know what that dark matter is actually made of. Physicists have some guesses. But researchers have never spotted any direct evidence to suggest that any particular guess is correct, with one possible exception: A single detector in Italy sparkled more in the winter than the summer, hinting that a particular model of dark matter was correct. But now, a new experiment trying to replicate that annual sparkle cycle has failed to turn up significant results, indicating that the Italian detector's dark matter evidence is likely wrong.

Here's the deal: One popular theory of dark matter states that the stuff is made up of particles called "weakly interacting massive particles," or "WIMPS." These WIMPs would be heavy particles not described in the Standard Model of physics, though they would likely be supersymmetric partners of Standard Model particles. WIMPs would use their gravity to tug on other particles, rarely interacting with them otherwise. [The 11 Biggest Unanswered Questions About Dark Matter]

Based on how dark matter seems to act on the light-emitting matter in the universe, researchers think that the substance tends to cluster in galaxies, holding them together. That means that if dark matter is made of WIMPs, more of them should strike the Earth in June, when our planet rushes toward the Milky Way's dark matter halo, than in December, when our planet rushes away from that region.Fortunately for team WIMP, a single experiment seemed to support that hypothesis.

In an underground place in Italy, photon detectors stare at sodium iodide crystals all day and night in the darkness, looking for traces of light. Those crystals sparkle when they interact with other particles, and in that buried place — called the DAMA/NaI experiment — WIMPs would be among the only other particles around.As early as April 1998, just three years after the DAMA/NaI experiment began, researchers reported in the journal Physics Letters B that the crystals seemed to light up more in the summer than the winter. That was exactly what researchers expected to see if dark matter was really made up of WIMPs. As recently as 2017, researchers looking at data from the 1995-2002 DAMA/NaI experiment and the upgraded DAMA/LIBRA experiment, which began in 2003, reported evidence for an annual shift in the crystals' behavior.

But those results haven't stood up very well in replication attempts.

The Xenon100 detector, also in Italy, similarly hunted for WIMPs — though it did so by staring at xenon, not sodium iodide, in a dark chamber. By 2010, it was clear that XENON100 wasn't going to spot DAMA's annual signal. Another, bigger xenon search, this one in China, reported no results earlier this year. However, still another experiment — called CoGeNT, based in Minnesota and relying on a single chunk of germanium — did seem to replicate DAMA's annual signal.

The latest news, however, is not good for DAMA. On Wednesday (Dec. 5), researchers at the Cosine-100 detector in South Korea published a paper in the journal Nature reporting that they'd seen no yearly shift in their newer, fancier detector. That's a big deal, because Cosine-100's light sensors are watching underground chunks of sodium iodide, just like DAMA's. So if DAMA had found a real result, it should show up in Cosine-100 as well.

"The result of this search is significant because, for the first time, we have sizeable sodium-iodide crystal detectors with enough sensitivity [test DAMA's claims]. It has been for 20 years that the potentially significant claim has not been reproduced using the same crystals independently," Hyun Su Lee, Cosine-100 co-spokesperson, said in a statement.

Researchers still don't know what caused the annual signal or why it showed up in DAMA but not Cosine-100. But the Korean team said it hopes an upcoming upgrade to its detector will turn up better data to help resolve the mystery of dark matter and the DAMA signal.