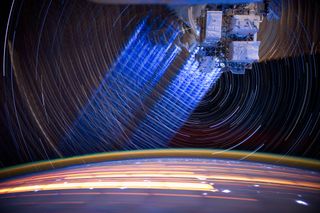 A long-exposure photo shows the trails of Earth and stars moving around the International Space Station.
(Image: © NASA)

Somewhere far away in the universe, a star bursts and a cascade begins.

Energy and small bits of matter speed away in every direction from the blooming supernova. They impact planets and other stars and crash into interstellar media, and some small portion of them reach Earth.

These are primary cosmic rays, the light beams and ghostly subatomic particles called neutrinos that scientists detect with fine telescopes and a strange, still detector buried beneath the ice of the South Pole. They arrive in a torrent from every direction at once, as stars die throughout the universe.

But they aren't the only cosmic rays. There's another type, more difficult to detect and mysterious. [The 18 Biggest Unsolved Mysteries in Physics]

When primary cosmic rays collide with interstellar media — the unknown, unseeable stuff between stars — that media comes to life, sending its own streams of charged particles out into space, said Samuel Ting, a professor of physics at the Massachusetts Institute of Technology who won the Nobel Prize in 1976 for discovering the first of a strange new class of particle made up of both matter and antimatter quarks.

And in a new paper published Jan. 11 in the journal Physical Review Letters, Ting and his colleagues have charted further just what those particles are and how they behave. Specifically, the researchers described the charges and spectra of particles of lithium, beryllium and boron nuclei that slam into Earth's atmosphere — building on earlier results describing the charges and spectra of helium, carbon and oxygen rays.

"To study these [particles], you need to put a magnetic device in space, because on the ground, charged cosmic rays are absorbed by the 100 kilometers [62 miles] of atmosphere," Ting told Live Science.

This paper's results are the culmination of more than two decades of work, dating back to a meeting in May 1994, when Ting and several other physicists went to visit Daniel Goldin, then the administrator of NASA. The goal: to convince Goldin to put a magnet on the International Space Station (ISS), which would begin construction four years later, in 1998. Without a magnet, the cosmic particles would just pass through any detectors in a straight line, giving no information about their properties, Ting said.

To avoid twisting the ISS out of the sky, Ting and his collaborators built the Alpha Magnetic Spectrometer (AMS): a particle detector as precise as those at Fermilab and CERN, but miniaturized and placed inside a hollow magnetic tube. Critically, the two halves of the tube have reversed polarities, so they torque the space station in opposite directions, cancelling one another out, Ting said.

In 2011, the AMS rode to space on the space shuttle Endeavor, that craft's second-to-last mission. And for much of the last decade, the AMS has silently detected 100 billion cosmic rays.

Ultimately, Ting and his team hope to use that data to answer very specific questions about the universe, he said. (Though it can also answer more-mundane questions, like what particles may pelt astronauts on their way to Mars.)

"People say, 'interstellar media' [or gases]. What is interstellar media? What is the property? No one really knows," Ting said. "Ninety percent of the matter in the universe you cannot see. And, therefore, you call it dark matter. And the question is: What is dark matter? Now, to do this [to answer that question], you need to measure very precisely positrons, antiprotons, anti-helium, and all these things."

Ting said that through careful measurements of the matter and antimatter arriving in secondary cosmic rays, he hopes to offer theorists the tools needed to describe the unseen matter in the universe — and through that description, figure out why the universe is made out of matter at all, and not antimatter. Many physicists, including Ting, believe that dark matter could be key to solving that problem.

"At the beginning, there must be an equal amount of matter and antimatter. So, the questions [are]: Why isn't the universe made out of antimatter? What happened? Are there anti-helium? Anti-carbon? Anti-oxygen? Where are they?"

Live Science reached out to a number of theorists working on dark matter to discuss Ting's work and this paper, and many cautioned that AMS' results have not yet shed much light on the subject — largely because the instrument has yet to make firm measurements of spacefaring antimatter (though there have been a few promising early results). [Twisted Physics: 7 Mind-Blowing Findings]

"How cosmic rays form and propagate is a fascinating and important problem that can help us understand the interstellar medium and potentially even high-energy explosions in other galaxies," Katie Mack, an astrophysicist at North Carolina State University, wrote in an email, adding that AMS is a critical part of that project.

It's possible that AMS will turn up more significant, verified antimatter results, Mack said, or that matter detections — like the ones described in this paper — will help researchers answer questions about dark matter. But that hasn't happened yet."But for the dark matter search," she told Live Science, "the most important thing is what the experiment can tell us about antimatter, because it's dark matter annihilating into matter-antimatter pairs that is the key signal being sought."

Ting said the project is getting there.

"We measure positrons [the antimatter twins of electrons]. And the spectrum looks very much like the theoretical spectrum of dark matter. But we need more statistics to confirm, and the rate is very low. So, we just have to wait for a few years," Ting said.